You know how you watch one indie movie on Netflix and the site only recommends you weird Daniel Radcliffe movies for the next six years? I sat down and watched one. It was pretty good. It's called Horns. Groovy Dusey score: 6.5.

Horns is advertised as a comedy-horror. As far as I can tell, it is neither. Instead, it's an introspective supernatural murder mystery thriller based on the book of the same name by Joe Hill, the son of Stephen King. There is nothing I would consider scary in the flick that wouldn't better be described as drama. The story includes several scenarios that conjure feelings of despair, betrayal, rejection, and anguish that are excellently emoted by the former face of Harry Potter. Only two minor criticisms of his masterful work here:

1. The action takes place in small town Washington state, but Daniel retains his English accent. I wasn't bothered, but once someone pointed it out, I couldn't unhear it.

2. I always forget how tiny of a person Daniel is and am constantly reminded by his interactions with the rest of the cast. I'm a fellow smol boy so I think I paid particular attention to it.

I hold some other minute gripes with the movie itself, to be revisited later. 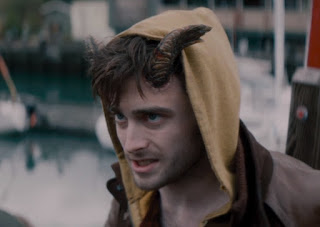 Mr. Tumnus?
After Ig Perrish is demonized as his late girlfriend's killer by the patrons of his hometown, he grows facial horns to match. This comes along with a super ability to manipulate those around him into divulging their deepest secrets and desires. Not much of anybody is surprised to see that Ig has sprouted these protrusions because they had long ago decided that Ig was an unholy murderer. Lee, Ig's childhood friend, is the only character unable to see his horns. This is because of course, Lee is a bastard and a son of a bitch who knows that Ig is innocent.
This movie has this sense of leaving you confused and then pulling you back in so you say "Oh, I get it now!" and then you slowly realize that there isn't really all that much to get. Almost every character aside from Ig is secretly a bad person or out to get him. The women in the movie are portrayed as disingenuous. As in most cases, I've been told that the book is much better in this respect and pretty much every other. If you're a nerd pansy who likes to read like myself, tell me how the book was below. When Ig's one night stand revels in her love for donuts and desire to pile on the pounds, it's strange and attention-grabbing. I assumed this was unintentional and bizarre. As the power of Ig's horns are gradually revealed, it seems like clever writing. But then the scenarios continue to progress into the extreme until the characters stop mattering. They become useless foils, only existing so that Ig can stroke his ego, unlock the next chapter of the plot, or exact revenge. Some are funny, some are embarrassing examples of Chekov's gun. Others are more confused. Marrin's father is so sure that Ig should burn in Hell forever, and later assures him that he will always have a place in her heart and bequeaths to him her beloved cross. What changed? There's also an entire subplot about Lee blowing his hand off with a cherry bomb given to him by Ig. It's supposed to build character but has little consequence in my opinion. Most of the flashbacks in my opinion fall flat and only delay the action.
This segues into another criticism I hold for Horns. Again, forgive me if the novel differs, but the resolution to the film seems geared towards anti-christian edgelords and proceeds almost exclusively by means of revenge porn. By 14 year-old atheists for 14 year-old atheists. The movie ends with a final stand-off between white knight Ig Perrish and rapist/murderer/bad friend Lee Torneau. Lee claims that since he fixed Marrin's cross when he was a child and because Marrin was leading him on, he was in the right. The climax is the most unsatisfying way I could think of for it all to end. Some police officers die violently, Ig turns into a giant, ashy demon and fatally wounds his former pal. Lee is then exploded when a snake slithers inside him and bursts. Ig himself passes soon after. So...Lee is incapacitated by supernatural intervention, some bystanders eat shit, and Ig turns into a battle-hardened monster and dies five minutes later. Makes sense.

Damn, Daniel
You may have the impression that I hate this movie. I liked it a lot. Great concept, poor execution. A tale as old as the camera. The cinematography is great and the locations are perfectly vibrant and alive. All the players are great performers. Aja is a wondrous director who accidentally made a great indie flick instead of a unique thriller. Despite all this, I found it hard to look away from the screen. Fans of his are perhaps better served rewatching The Hills Have Eyes. And Harry Potter junkies...there's always ABC Family. I still think you should watch it though, they play David bowie twice. 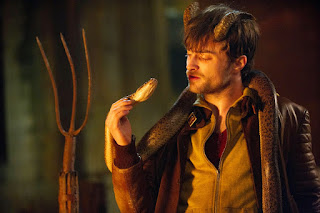