1. He almost singlehandedly redeemed the relief pitcher position from one that was reserved for failing starters to a weapon that helped win three straight World Series titles.
2. His glorious and iconic facial hair. 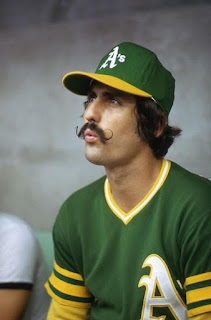 Below is the internet's best breakdown of the absolute caterpillar that dominated Rollie's appearance.

Rollie Fingers is a pretty big deal. He is one of four relievers to ever win an MVP award during the regular season (the others being Jim Konstanty - 1950, Willie Hernández - 1984, and Dennis Eckersley - 1992). Fingers was the second reliefman to be enshrined in the National Baseball Hall of Fame after Hoyt Wilhelm, who won 124 games in the role and played in the majors until he was nearly fifty. He has a pretty good name too, but then again he played on the same team as Catfish Hunter. Hailing from Steubenville, Ohio, ferocious Roland became a 7x all-star and led the league in saves three times. He was so cool, he didn't even have to pay taxes. Allegedly. But this article isn't about Rollie fingers - it's all about the 'stache.


In 2012, fans weighed in on the greatest whiskers America's pastime had to offer. You can probably only imagine who topped their list. Below are the top 5, brought to you by Baseball-Reference.com.

As you may observe, there is of course no contest for mustacho supremo. Personally, I think Boggs only got in because of his on-field ability and Keith Hernandez bares an uncanny resemblance to an alternate reality Jack Pearson. My own shoutout eight years later would go to my main man Danny Espinosa. 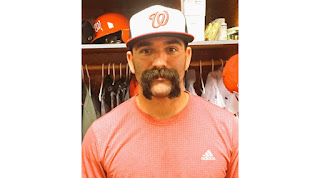 a career batting average of .221, and an absolute cookie duster

The mustache of Rollie Fingers was born from the desire of cash winnings, and now his face furniture is priceless. Upon the arrival of bearded Reggie Jackson to the Oakland Athletics in 1972, the boys began a locker room practice of growing out their little dirt squirrels. They were pretty convinced team owner Charlie Finley would force Jackson to shave, and played their part. Money-making Charlie instead offered competition - whoever grew the best lady-tickler would win a cash prize of $300, the 2020 equivalent of a cool $1,852 according to the US inflation calculator.  On June 18th of that year, the A's awarded free admission to any fan sporting a mustache of their own. The Athletics finished the season with 93 wins and a World Series victory, the first of three in a row. Rollie later recalled that "Most of us would have grown one anywhere on our bodies for $300." (Dickey 1986). 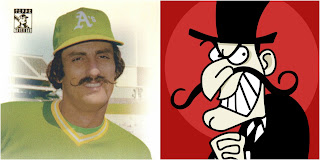 Finger's iconic mustache was often styled as the "Snidely Whiplash" after the famous Dudley Do-Right villain. I also totally forgot that there is a live-action movie starring Brendan Fraser, who sacrificed so much for our entertainment during the heyday of Blockbuster Video.

Rollie Fingers still sports his mustache today at 73 years old. In 1986, MLB all-time hits leader Pete Rose encouraged Rollie to try out for the Cincinnati Reds, who had a clean-cut facial hair policy set in place by team owner Marge Schott. Fingers instead chose to retire, unless Miss Marge shaved her dog in an act of solidarity. This marked the end of his playing career. The Reds abolished the policy in 1999. The New York Yankees still require players to be shaven and and sport haircuts above the shoulder. Some players, including Cy Young recipient David Price, have refused to sign in NY as long as the policy is mandated. 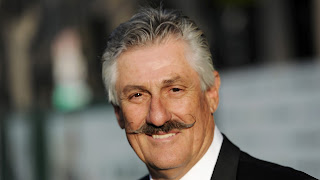 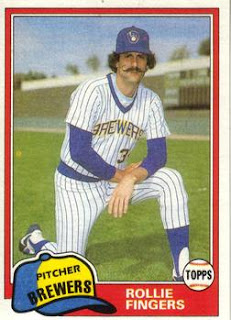 Rollie's 1981 Topps card. 1981 marked his first year as a member of the Milwaukee Brewers, in which he won the AL MVP and Cy Young Award. 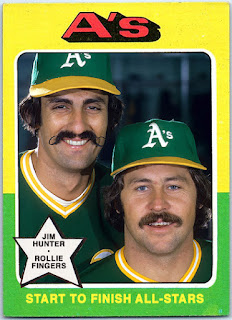 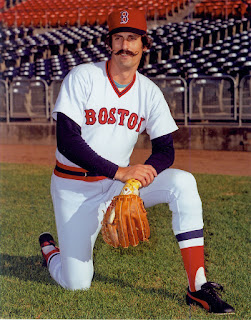 Left fielder Joe Rudi and Fingers were sold to the Boston Red Sox in 1976, the problem being that baseball commissioner Bowie Kuhn nullified the trade. Rollie Fingers spent a total of three days as a member of the BoSox, posing in what is now an infamous promotional picture invoking a potential alternate reality for the star and Major League Baseball. 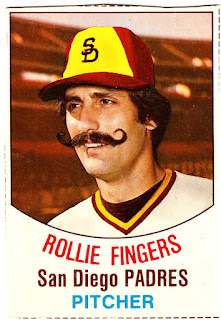 Following the failed trade, Fingers exited the club soon afterwards. As a member of the Padres, he won the Rolaids Relief Man of the Year achievement in its second season awarded. Rollie would go on to win the award three out the first five offerings for the National League. He would win the American League honor in 1981. 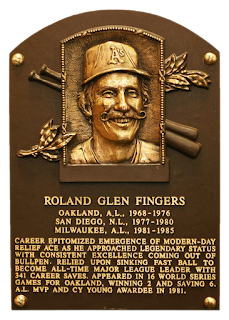 Fingers' jersey has since been retired by both the A's and Brewers. He was inducted into the Hall of Fame in 1992, with 81% of the vote, second ballot.

Who has the most iconic mustache in sports? And where do you rank Rollie's "Snidely Whiplash"? Thanks for reading! Check out these sources and stay tuned. If you have a favorite picture of Rollie's 'stache, post it on my facebook home @ Club Dusey. Goodnight!