Celebrating this movie as a slasher flick is like calling Joker a childrens' film just because it has a clown in the movie. Does the guy kill people hooks? Well, yes, but Candyman is a psychological thriller about racial disparity and strife in America, urban fear attribution, and the power of rumor. This is Candyman, and Club Dusey's first 10/10. 'Nuff said. 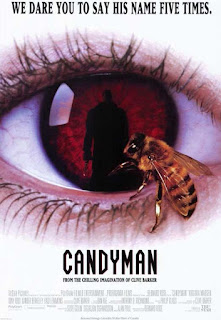 The Candyman was adapted from Clive Barker's short story "The Forbidden", which can be found in volume five of his series Books of Blood. You may know Clive Barker as the guy who wrote and directed Hellraiser (1987). Fellow Brit Bernard Rose was gifted the adaptation rights and chose to relocate the events of the story from Liverpool, England to Chicago, USA. "The Forbidden" is an allegorical take on the socioeconomic segregation culture occurring in Barker's home country. Rose, inspired by racial prejudice in Chicago's near north side, filmed on location at Cabrini-Green housing project, the setting of the film. Rose took note of the area's high rates of violent death, robbery, and assault and the peculiarity that the area could be openly viewed by more affluent residents on either side. Cabrini-Green was a self-contained arena of injustice, with the police too bothered to care. The real-life housing complex was demolished and gentrified in 2011. 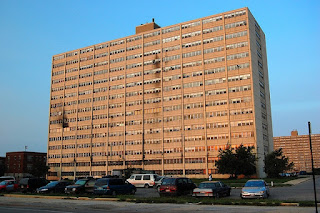 Here are some of the stranger and interesting trivia points of the film, all true to my knowledge:


The movie begins with a short anecdote tale of a bad boy spending the night with a babysitter and repeating the name '"candyman" into the mirror five times. The girl is murdered by a hook-handed ghost and the young man barely escapes with his life, without his sanity. At least, that's the way an interviewee recalls it.

Helen is a nice young grad student who decides to write a thesis on why poor people and minorities are perpetuating the myth of the Candyman to cope with their hardships - such as violent crime and rampant drug use in their neighborhood. Her husband is a professor at the university, and they both look and act at least 15 years older than they are. A friend of Helen's husband informs her that he had written on the subject over a decade prior. The legend of the candyman originates from the son of a slave, who acquired good standing through the invention of a shoe-making mass production technique. The man had also been recognized for a talent in painting. The man impregnated the subject of one of his paintings, a white woman. He was rushed by a lynch mob that severed his arm and set bees upon him. Proving fatal, they burned his body and released the ashes upon the land that he now is said to haunt.

After prompting from Helen, she and Bernadette begin their investigation. On their first few trips the cursed project homes, Helen learns some valuable details. Behind Ruthie's busted mirror lies the Candyman's lair. The opening is shaped to resemble the mouth of the killer, and she encounters razor blade-filled candy as well. Next door, Bernadette and Helen meet Ann-Marie, a single black mother raising her newborn son Anthony. Ann-Marie is skeptical of Helen, admonishing that white folk around there always thought down upon them, and that the majority of residents were like herself - just trying to get by. Her apartment walls are a gaudy pink color - curiously the same shade her husband repaints their home after she is committed. 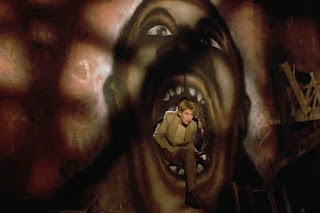 Upon her next visit, Helen learns of a boy who was castrated in the restrooms outside. She is this time prodding around on her lonesome. Suddenly, she is attacked by a gang leader, blacking out with a swollen eye. "We heard you lookin' for candyman, bitch!". The gang leader is captured and arrested for his misdeeds. This is where Helen's troubles begin.

Helen is confronted by the real Candyman in a parking garage. She nearly passes out. He warns her that now that she has tried to discredit him, he has to kill to bring his story back to the forefront. This reveal does not occur until approximately the 45 - minute mark. The buildup is superb. And let me tell you - the surround sound in my house is terrific :( From here on out, the movie is hasty. Even if you paid for the whole seat, you'll only be sitting on the edge! OoOoOh that voice.

Helen awakes in Ann-Marie's apartment, clutching a meat cleaver and covered in blood. Only the severed head of Ann-Marie's dog remains and little Anthony has disappeared. This scene is burned into my memory dating back to the first time I saw it a decade ago. It it that vivid and terrific. Ann-Marie of course attacks her and they catfight until the police bust down the door to see Helen on top of Ann-Marie with a bloody meat cleaver. She is of course arrested. Next, bloody and distressed Helen is forced to strip naked with the blood still packed on her to collect for evidence. This scene also stood out to me for its ability to trigger empathy. Helen is confused, upset, and being vilified all while crying that she just wants a shower. Those who were kind to her previously are now hostile. It's inevitable that your brain considers the possibilities. What if it were my girlfriend in this position? Trevor bails her out, but he is probably cheating on her.

After Helen is framed once again for murder, this time for her friend Bernadette, she is committed. After she is strapped in for the night, the Candyman appears to her. It is reminiscent of the hospital scene from the first Nightmare on Elm Street movie, except he floats down from space to taunt her. At this point, it did seem a bit silly, but I accepted it. Helen is basically sedated heavily for the entire month, where they finally decide to see if she is fit to stand trial or a complete psycho loony. Helen summons the Candyman, who kills the doctor and sets her free. My question: how does this look on camera? If she was restrained until after the doctor is murdered and no one else can see the ghost, than how? Maybe I wasn't meant to know. Helen escapes wearing a worker's uniform and goes to her apartment to find that Trevor has already shacked up with one of his young students Stacey.

The climactic ending speaks for itself. Words cannot do it the justice that the footage can. "It was always you, Helen. It was always you." I have questions for this bit too. Did Helen willfully give herself to the next life? Was it always the plan? When did she truly "die"? At the fire or before? Will she ever die? Do the stories of her force her to kill and give the violence new life? Why? Is it all an elaborate curse or a Faustian tale of caution? Phew. Great ending by the way. It makes me wonder if Ann-Marie had forgiven Helen for her crime or if she recognized that the woman was overtaken and manipulated by the spectre. Even if the ending doesn't feel like it makes sense, it follows the only path that seems logical. It just clicks, like there was no where else to go. Gotta say though, the burnt Helen makeup- not impressive.

The picture quality is fantastic for the year, and the storytelling is a highlight in a decade considered a dud for horror critics. The musical score by Philip Glass is classical, passing through the same tense string drops seen in Halloween (1978). It is followed by two poorly-recieved sequels, Candyman: Farewell to the Flesh (1995) and Candyman: Day of the Dead (1999). Jordan Peele of Get Out (2017) and Us (2019) success has written a 2020 follow-up, delayed due to the spread of the COVID-19 virus.

The message of this movie is unique amongst its time period. It is a horror movie that relies on your real fears, and not some cartoon monster under your bed. It reminds of 2014's The Babadook, except Candyman is good, pioneering, and less Australian. The movie makes you see yourself within its characters, and then rips your heart out. It addresses American inadequacies that still reign supreme thirty years later. However, I viewed this as a white male. I'd love to hear takes from others, because mine is only partially valid. This is why it makes us so uncomfortable. Many of us are even the problem, the by-standers. Some of us are Ann-Marie, and some of us....some of us are one with the Candyman. Goodnight.

What are the cultural lens you saw the movie through? What did I miss? See you next time, boils and ghouls. 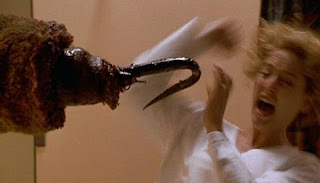