Wassup everybody, its ya boy so smash that share button. Today I am taking a long, silent look at a movie with no sound. A film that was described to the audience as a romantic drama story. Except, it is almost exclusively remembered as an unsettling pioneer of monster classics. The good news is this - it is remembered! This Club Dusey feature inspired the design and creation of Batman's greatest foe. The Man Who Laughs has a supremely rare 100% approval rating on Rotten Tomatoes, so it is no laughing matter. ha ha. 5.5/10. We live in a society, dammit. 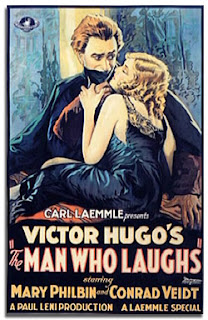 This motion picture has been brought to you by the one and only Carl Laemmle, the man who was running a film distribution service in the 1890s. After playing a hand in early Universal monster classics Phantom of the Opera (1925) and The Hunchback of Notre Dame (1928) with his son, he moved on to produce the iconic 1931 Dracula movie starring Bela Lugosi. Interestingly, this is the second film adaptation by Laemmle of a novel by French poet Victor Hugo. The source material also follows the reception pattern of the picture adaptation. After spending months in relative isolation following the political controversy sparked by his signature work Les Misérables, Hugo released The Man Who Laughs to an audience that considered it a dud. It is now heralded as one of his many celebrated releases. Similarly, movie-goers were initially cold to Universal Studio's latest offering, now considered an all-time favorite of expressionist media. The titular character lives on in countless personas inspired by his likeness in the nearly one-hundred years since the movie released.

The story takes place in the late 17th century, where the king of England, James II, has captured a primary enemy of his. After assuring him that the man's son was safe, he reveals his plan to carve a permanent smile into the boy's face so that he grows up forever laughing at the failure of his father. The son, Gwynplaine, is doomed to live his cursed existence as a clown to be giggled at in freak shows. To the delight of his creepy jester, Barkilphedro, Lord Clancharlie is then forced into execution by way of the Iron Maiden, a spiked cocoon. Remember - this is a romance movie.

Next, we are introduced to the comprachicos, a ghastly group of fellows who distort the characteristics of children to make them fit for carnival work. These acts may include the slitting of the eyes or twisting of bones to create dwarf-sized people. These children were usually captured or sold into slavery. Historians agree that Victor Hugo portrays them in a mostly accurate light, but that their descriptions and age of prominence are a blend of folklore of reality. Gwynplaine, having been left behind as a boy and forever branded with a smile, scrounges through the snow until he crosses a mother and baby frozen in the storm. The mother is already long dead from the cruel touch of frostbitten winter, but the baby is still breathing. She is later named Dea and taken with the boy to the makeshift home of Ursus, a guy with crazy expressive eyes and a vicious dog named Homo. Different times, I suppose.

We now enter the time warp to glance at the present day Gwynplaine and Dea, now in love and traveling in a freak show from fair to fair. The young couple are madly enamored with one another. Dea, having been blinded, sees Gwynplaine only as a kind and gentle heart. Gwynplaine, feeling that he is undeserving of her love, develops an inferiority complex. Dea is portrayed by Mary Philbin, still remembered for her role as Christine in Phantom of the Opera (1925). Philbin is of course pretty, but bares a striking resemblance to her co-star Olga Baklanova, minus a small mole near the precipice of her chin. I get that some directors have a type, but this is a silent movie here and when the characters are introduced my tiny ant brain got turned around...several times.

Dea and Ursus. The eyes on this guy...

The beautiful Duchess Josiana is established through expositional dialogue as a sexual fiend and free spirit. Her family worries about her :( She attends the carnival show on a fateful night and invites Gwynplaine back to her castle to get freaky. Gwynplaine, delighted to know a woman who wants to see him despite his anomaly, rushes off. Dea, though blind, awakes during the night to sob, knowing all too well what has happened to her love. Josiana attempts to use Gwynplaine's disfigurement to satisfy her kink. As beautiful as she is, Gwyn cannot bring himself to make sex with her, whether from his shame, embarrassment, or both. She then tries to use girl power to force him, in what would now probably be considered assault. At his departure, she learns of his lineage to Clancharlie.

Gwyn comes back to an ecstatic Dea only to be arrested. Why would you arrest a clown? To appoint him to the House of Lords of course. I actually thought being arrested before holding office was only a requirement in Australia. Queen Anne is big sad that her daughter must marry a circus freak who happens to be Clancharlie's son, but you have to keep the estate in check when you're queen I am told.

Here is my beef with the carnival crew. Ursus finds the police exiting the castle with a casket that he assumes belongs to a certain Gwynplaine. Horrified, he runs back and swears that he cannot break Dea's heart. So instead, the entire crew performs the show as normal and shout and scream for Gwynplaine as if they were a packed crowd on a Saturday night. Ursus, who has now had his eyes bulging out of head for the previous ten minutes of the flick, has a heart attack or faints and collapses. Are you kidding me?!? I love you enough to tell you the truth Dea...like a real man. This is in my opinion, the best cinematography work and overall scene of the flick.

The conclusion of the film is mostly a Scooby-Doo type of chase and play on emotions. It's a cliche that one hundred years later falls flat. "Gwynplaine is dead! Oh nevermind...Okay, Now he is for sure dead! Oh, hold on..." This includes however more treachery by that fat jerk Barkilphedro, and the presentation of Gwynplaine before the Queen, a powerful and moving display of emotion and acting prowess. Gwynplaine catches the banished Dea and Ursus at the docks just as they set sail with the help of Homo. His pursuit by the authorities is an unsuspenseful act, given they have already put your heart in a blender several times in regards to the clown's well-being. It's tiresome. The movie then quickly concludes its two hour story with the goodbye words "Finis". This is a undoubtedly a more hopeful ending than the novel, which ends with pretty much everybody dead.

This is a picture of moments. The movie drags and drags, until it becomes brilliant. It's like a long road trip through the desert, only to stop at a monument that was once important, only to resume again and repeat forever. With no bathroom breaks. When you finish the film and look back on the memory of the road trip, you don't remember how long you stared out at the unchanging desert or how bad you had to pee, or your screaming nephew, you remember the good times. 90% of this movie blows ass. The other 10% is bursting with feelings, wonderful performances by actors born 150 years ago, and lovely symbolism. these are minute and far between, but enough to make it a film worth your investment. Even if just for the components that created a lasting legacy, The Man Who Laughs is a joy the first viewing.

Now, I watched a version of the film with an absolutely delightful piano, strings, and horn backing accompaniment. Charming highlight of the movie. Trying to imagine sitting in silence for almost two hours during this borderline snooze-fest sounds like suddenly remembering you have to attend a staff meeting without donuts.The film was first released without sound of any kind, which is upsetting to hear. More uplifting, some theaters often hired musicians to play during silent films. The more you know! I also want to praise the camera work at the first act mirror reflection scene and the introductory carnival scene, complete with spinning ferris wheel shot. Very cool. 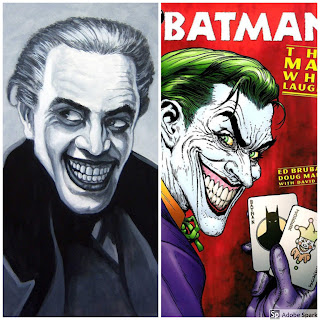 Like copying someone else's homework, but for the greater good

This was Club Dusey's first silent movie, so we had no frame of reference. What are your favorites? If you've seen this flick and 2019's Joker, shout it out! Take care, and stay inside!