My name is Louis. My dad’s name is Louis. His dad? The same. Do you know how many times I’ve heard this godforsaken song? I’ve grown mad and drunk with anguish. The 1963 hit was almost too sexy for US airwaves…because no one knew the words. And then it got probed by the Federal Bureau of Investigation for 31 months (almost three years). Mmm, tasty tax dollars. Here's the article, my Louies. 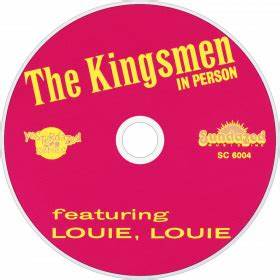 According to louielouie.net, "Louie Louie" is the most recorded song of all-time, with over 2,000 such entries. It was written in 1955, by doo-wop artist Richard Berry, based on the R&B tune "El Loco Chacha". It contains a repeated backbeat that Berry began to sing the name "Louie" over top of and it stuck. This version contains more elements of musical ballad and is certainly less raucous. After some small success, particularly in the Seattle area, Berry sold the rights to the song to Flip Records for just over $700.

The Kingsmen hailing from Portland, Oregon recorded the most famous cover of the song in April of 1963. They had been raised in the Pacific Northwest, the hotbed for the early success of Richard Berry's original. The recording cost the band approximately $50, split from each member. It was finished in part by Ken Chase, who had been booking the Kingsmen in his own club as the house band. The group had rehearsed for the recording by performing the song for an uninterrupted hour and a half at a local club the night before.

The wild nature of the recording is marred by several mistakes, some of which have altered the way the song is now heard and played. It was finished in a singular take.

The band had broken up in no time, but the song had achieved success after famous DJ Arnie Ginsberg played the song to ridicule it on air, calling it the worst single of the week. The song became a party anthem and teenage groove that swept the youth, becoming a chant for anti-authoritarian culture in the U.S. It later surged to the no. 2 spot on the Billboard Hot 100. The tune also gained popularity in the form of controversy, where rumors of dirty lyrics and improvised sexual references became a part of the song's culture and a staple of underground covers. The song reached #1 on the Cashbox pop charts and R&B charts until it was dethroned by "I Wanna Hold Your Hand" when Beatlemania grabbed the world in a stranglehold. These songs are almost fifty years old.

Anyway, someone's angry mom wrote a letter to acting attorney general Robert Kennedy (gone too soon) and the FBI proceeded to investigate the song for traces of obscenity. The exact offense sought to determine whether "those involved with the song violated laws against the interstate transportation of obscene material." This continued for the better part of three years. 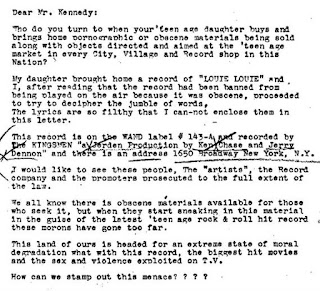 A transcript of the letter, written anonymously by "a concerned parent"

The government's main strategies were repeated listening of the song through slowed down and isolated points of interest, as well as interviews with the band. The FBI never even considered requesting response from the song's writer Richard Berry, or even reading the actual lyrics that were already on government file with the U.S. Copyright Office. lol. After 31 months of careful consideration, the FBI concluded that the lyrics were not found to be obscene on the grounds that a majority of the words are "entirely unintelligible". The release report was over 100 pages long. Unfortunately, in many places the damage had been done. The hit had been banned from countless radio stations, and the governor of Indiana personally denounced it. 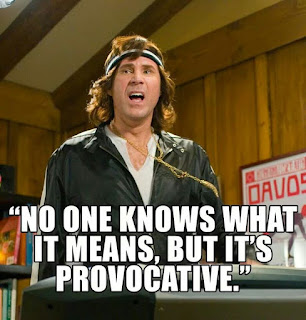 Have you heard this song before? Of course, you have. That's the uplifting ending here today. This controversy began almost sixty years ago, and everyone still knows the song. Is it a dumb song? Also yes. "Louie Louie" has been covered in nearly every genre, by influential artists. It has spawned musical sequels, listening marathons, holidays, festivals and parades. April 11th, Berry's birthday, is international Louie Louie day. A high school principal tried to ban it as recently as the mid-2000s.

Here are some of the most famous such recreations:

I'm sure you and I are both exhausted at this point, so here I will wish you an excellent life and for you to go and make merriment. The night is still young...And remember to fight censorship wherever you see it. But not physically. G'night everybody. 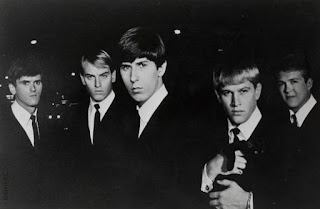