Have you ever been at a middle school dance and when your date's uncle shows up to take her home he whips out a gun? Just me? Anyway, this is what watching this film feels like, except it's in black and white and there's a horrible draft in the background. It's a great horror movie. The Old Dark House parodies the confines of the haunted mansion movie, while also defining it. A spin of the ol' Club Dusey-meter stops at 9/10. A masterpiece that Universal almost lost forever. 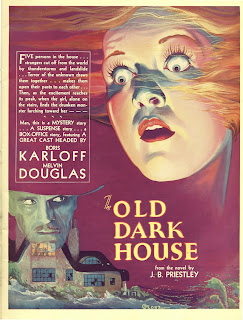 The Old Dark House is actually the 4th film directed by James Whale that I've effectively reviewed. However, It's the first time I have given him his due in research. Here's some things I never knew: 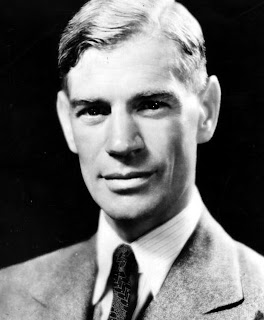 The Old Dark House was built on a screenplay adaptation of English novelist J.B. Priestley's 1928 book Benighted, a 152 page allegory with themes of post-war disillusionment following British involvement in the first world war. The story went out of print for many years until it was later redistributed with the same name of the movie. Interestingly enough, the film itself was considered lost for decades, when Whale's friend Curtis Harrington begged Universal to search for it. In 1968, reels were eventually found under the studio's control and subsequently reproduced. It now hold a rare 100% score on review site Rotten Tomatoes. By then, Universal had long since lost the rights and a remake had been produced by Hammer Horror five years earlier. This version has been recieved far less kindly.

The film stars Boris Karloff, Melvyn Douglas, Charles Laughton, Eva Moore, and Lillian Bond, among others. His first Hollywood film, Laughton would later garner acclaim in the 1935 portrayal of Inspector Javert in Les Misérables. Cast member Gloria Stuart is perhaps best remembered for her role in James Cameron's Titanic 65 years later. Dear god. The film's cast also includes Ernest Thesiger, who alongside Karloff would feature in James Whale's Bride of Frankenstein. The movie also has a guy named Brember in it - in case you were wondering. The film opens with this message shortly following the title screen: 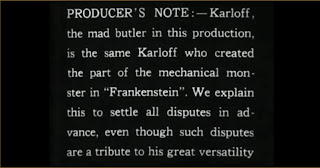 Incredible show of respect from Universal Studios to Boris Karloff


The film opens up Rocky Horror style. Mr. and Mrs. Waverton are driving in a car so old the rain is drenching them from the back. Smoking a pipe in the lower seat is their acquaintance, Mr. Penderel smoking a pipe. The first several minutes of the movie are filled by obstacle after obstacle by which their piece of shit automobile must overcome. I think it's supposed to be suspenseful. It goes on entirely too long, and the storm sound is mixed way too loudly to enjoy. Once they had forded the river, the mountainside behind them collapses and they are left with no choice to burden the residents of an old Welsh manor. They are greeted by a creepy Wolf-Man looking fellow and eventually welcomed in by a lanky older gentleman. He explains that his sister is mostly deaf. Rebecca's most charming trait is her unwelcoming attitude and strangeness. All three residents of the house move in mysterious twitches, adding to the unsettling and harsh depiction of the family. It's honestly quite creepy. The lanky man, Horace, is stricken with fear at the idea of being trapped for the night. Rebecca calls him out for being godless and too afraid of death. Margaret Waverton asks for a room to change into some jammies and Rebecca leads her away. Here, Rebecca fills Margaret in on all the relatives of the Femm family who have passed away and reiterates her stance on heathens. Then she slut shames her something fierce. Director James Whale plays with audio spooks and a haunting mirror effect that will raise your heartbeat. Margaret is of course overwhelmed and throws open a window. Rebecca lets it slip that her 102 year-old dad is still alive in the house. 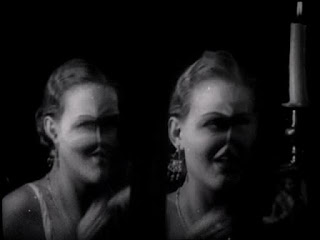 Dinner is served. Rebecca prays and let's everyone know how awful they are for not joining her. Horace begins to really only respond with the phrase, "have a potato". Everyone is very thankful for the potato. Mmm, potato. Horace explains that the hairy butler-man, Morgan, is mute but he fears that he will get drunk and become dangerous. Horace proceeds to do literally nothing to prevent it. There is another knocking at the door, which brings two more guests to this crazy ensemble. In comes William Porterhouse and Gladys DuCane. "Have a potato" commences. The group all chat about when Mr. Penderel realizes that DuCane has got it going on. After William accuses her of being fake because she goes by her chorus girl stage name, Gladys reveals her real last name is Perkins. William then breaks into some story about his wife is dead or whatever and no one seems to care. Mr. Penderel thought it was awkward and invites Gladys to go smoke and drink whiskey in his car, which is honestly hilarious. Some things never change. So they go out to the car, fall in love, and kiss open-mouthed. Gladys explains to him that while William was giving her an allowance to live on, he didn't expect sex in return and that he just appreciated her company. Mr. Penderel decides immediately with his tiny, horny brain that he will ask her to marry him in the morning and they will run off.
The couple makes their way back inside to give William the news, where he comes off as apathetic. He is disappointed to find that even all his wealth could not keep her. Mr. Penderel then pretends that he and William are buddies somehow after he just big time cucked him and encourages him to attend their wedding.

Meanwhile, the electric lights are out in the house, where Horace remarks that the Femms were never quite good with electricity. Rebecca teases him for being too afraid to collect the lamp from upstairs. The group come into an agreement for Mr. Waverton and Horace to go together. Halfway up, Horace tries to distract Mr. Waverton with some shiny stuff he wants to show him from his room. Philip reminds him that they are on a mission. Horace breaks down and tells him he is much too afraid to continue and thanks him profusely. Phillip obtains the lamp with ease, but hears a voice call out from an adjacent room. Philip is confident he will return to investigate. Downstairs, Margaret is left defenseless against the mad drunken brute Morgan, who chases her around a table. After Philip meets him at the stairs, he bashes him with the lamp and the servant comes crashing down a full flight. Philip determines that he is not dead, but stunned. Him and his wife proceed back up to search the room. 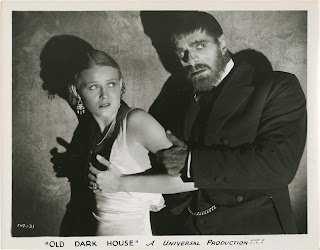 After entering the room, they discover the 102 year-old Roderick Femm. Rebecca had convinced them earlier that he was now riddled useless of mind, but Roderick is articulate and aware. Roderick Femm's actor is credited as John Dudgeon. This cast member does not exist. James Whale tried relentlessly to find a man fit for the part to no avail. Roderick Femm is then played by Elspeth Dudgeon, a woman. She was cast correctly for look, however Roderick's voice is undeniably feminine. This rendered my disbelief compromised. Minor complaint, I know. The beard and make-up is supreme. Finally, Roderick reveals yet another hidden resident of the house named Saul - a dangerous pyromaniac locked away. He suspects Morgan will free him. This proves to be a correct hypothesis. 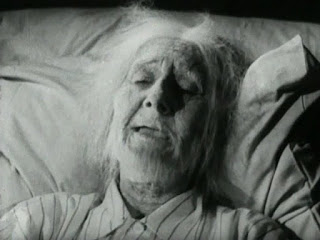 The impressive cosmetic work of Elspeth Dudgeon as Roderick Femm

The movie climaxes thusly - Morgan growls and chases about some more as the women of the film are locked away for safety. The ensuing brawl and chase is reminiscent of the Scooby-Doo door gag. Only Saul's hand is visible for many minutes. Finally, the mad man is revealed in full. He is bearded and kind. He asks Roger Penderel to stay with him and claims he was locked away because he knows the Femm family secret. One of the big storytelling pluses of the film are its guessing techniques. Until the very end, you are left to wonder who is the worry of the house. Saul? Morgan? Perhaps Rebecca and Horace are truly dishonest and wicked? You find out soon enough. Saul asks who is hiding and promises to divulge unto Roger a great deal of knowledge. Mr. Penderel understands he must play along to divert Saul's attention away from the girls. You can feel his tension, his anguish. He will not compromise. Saul eventually digs himself into a hole and is forced to let his insanity show. He goes on a biblical-fueled rant while wielding a sharpened dagger. When his tale has reached its startling end, the dagger is thrown, just missing the brain of Roger Penderel. Just when you think he survived the attack, Saul starts beating the shit out of him with a chair until the man passes out. Saul starts shouting and laughing while he lights the curtain with a torch. Roger regains consciousness and initiates a deadly struggle with Saul that culminates in both men falling from the stair railing to their doom. The girls convince Morgan that both men are hurt and they need medical attention. Saul is dead, while Roger is alive. Keeping his promise, Mr. Penderel awakes and asks Gladys to marry him. She happily obliges to. Horace kindly sends both parties on their way and reminds them that he was glad to have met. Rebecca shouts from the window, "BAH!".

The Old Dark House is a title that has become synonymous with its genre. While the plot style now bears its name, the genre owes its roots equally with 1927's silent film The Cat and the Canary, based on a 1922 stage play. The movie was remade three times in twelve years, including a comedy hybrid starring Bob Hope in 1939. This style of haunted house film would remain popular with audiences and studies alike for the few decades. A notable example is the original House on Haunted Hill with Vincent Price (1959).

The story is simple, but mysterious. Whale creates scenarios that are stressful, rather than scary. You sympathize with the characters and their thoughts. You never know whether a choice is wise or damning, in contrast with modern portrayals. Ever scream at the tele because the protagonist hid in the handle to the killer's knife collection? IT'S FRUSTRATING. The camera work is phenomenal. The use of shadows in pre-code horror almost always seem to please me. Foreshadowing with light seems to be a lost art in chillers. Downsides are minimal, the audio has not aged well particularly. There is a persisting wind noise that is mixed in rather harshly. In crucial moments, the dialogue suffers because of it. I'm curious if the set had ever been reused. Many loose ends are left unexplained. What is the Femms intrinsic reaction to the death of Saul, the behavior of Morgan? At the conclusion of the film, it feels like a hard reset. None of the impact of events affect the characters in a meaningful way. There is no real epilogue except a simple goodbye. Don't get it twisted though. I do not want everything spoon-fed to me, I just felt it was sudden. In any case, the film wraps up satisfyingly enough. Thanks for wasting away with me as always, and be sure to stay close when the light begins to dim. What are your favorite haunted house movies? Let me know on Facebook @ Club Dusey. moi. 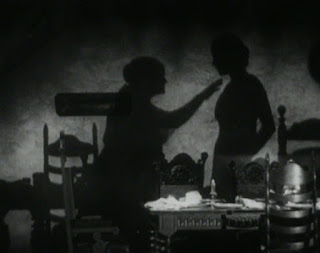 What happens by candlelight is often regretful