How to Survive a Drop Bear Attack

A rustling in the trees. A scent of death. The screeching "walala" you hear before it sinks its meaty claws into your juicy eyeballs. Where will you be when the Drop Bear strikes? 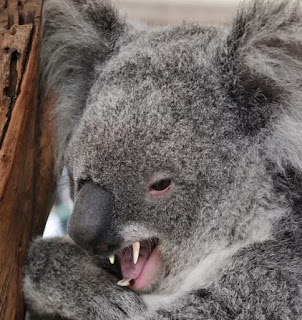 Recent years have seen a dramatic influx of tasty tourists disappearing from the densely forested lands of Australia. If you are planning a visit, it's essential that you know the enemy. That's why Club Dusey has made it a priority to deliver this handy dandy survival guide. Between dodging tarantula and hungry kangaroo, drop bear might just find it opportune to pay you a visit - a deadly one with no refund!

So what exactly is a drop bear? Scientifically, the drop bear is a close cousin of the relatively harmless koala bear. Instead of a measly diet of eucalyptus however, the thylarctos plummetus preys on unsuspecting visitors to the outback. Dr. Volker Janssen, representing the University of Tasmania, conducted a team study that suggests that non-Australians are more likely to be attacked (Australian Geographic 2013). He explains, natives eat Vegemite at least daily, which acts as a repellent. Other strategies include applying copious amounts of toothpaste to the body and wearing forks in the hair. Since drop bears are so keen to make a surprise ambush, pointed forks will deter this marsupial from dropping, as it poses a danger to their own safety. This practice has been challenged however, as the animal has been observed to adapt and use the fork as a dining tool on your skin. Club Dusey cannot consciously advise this survival method.

Since their key weapon is the power of astonishment, even spotting them or making eye contact can save your life. Always remain a distance from nearby trees with branch cover. It is suggested one attempt to adopt an accent, no matter how unskilled. The drop bear can usually detect how genuine this speech is, but it might just be convincing enough to ward off this bush-stalking predator. Be sure to use the word "bonza" as often as colloquially possible.

Other suggestions include purchases of floppy hats with cork and bell attachments sold at gift shops. In this way, you will also support the small market economy of the outback. Bear-O-Guard spray has become popular in recent years, but its effectiveness on weekdays has proven to be hit or miss. I personally recommend at least two pumps of Bear-O-Guard, applied in an aerial fashion. Your motions should be deliberate and precise, akin to the high sweeps of a helicopter. Be sure to stay in constant communication with both the tourist agencies of the land and your right-on mate for their tricks and suggestion. Likely survivors themselves, they know a thing or do about these buggered little cunts.

Recent studies have concluded perhaps the species is not entirely unique to the animal kingdom. New evidence has even suggested that all drop bears begin as koalas and are later plagued by a rabies-like transmission that makes them aggressive. Scientists are uncertain on  the nature of this development, as a natural specimen has never been captured alive or dead for the purpose of study. In addition to their tree-bound nature, they tend to be extremely territorial, requiring intense awareness to avoid becoming their untimely prey. Some reports have even confirmed hotel room sneak attacks! 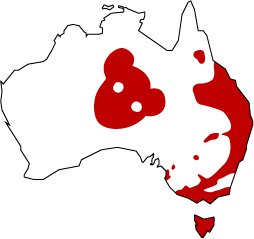 Map provided by the Australian Museum's Russ Weakly, illustrating the creature's range. Sightings are most common in southeast Australia, with attacks confirmed from Tasmania to Kangaroo Island. 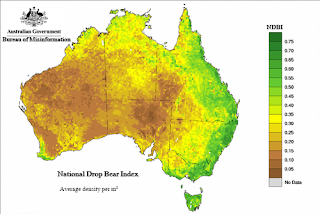 This geographic rendering provided by the Australian Bureau of Misinformation shows approximately the population density of the thylarctos plummetus. 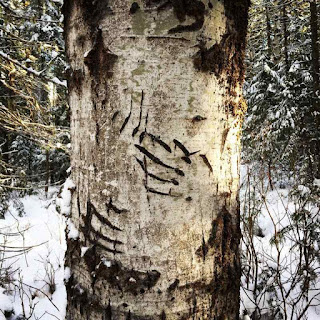 Warning signs are often posted in high concentration danger zones, but this is not a certainty. If you see the mark of their claws, be sure to spot the old bugger and dart for the nearest safety. Drop bears can grow to the size of a hunting dog or wolverine, but they move very quickly. They possess a natural ability to jump and maneuver through the treeline with ease, making them silent killers. Heed the signs that a drop bear is near and decrease your chances of a bloody encounter. Be loud and confident, but not careless. Luckily total deaths by boxing glove kangaroo have steadily decreased this decade, but are not unheard of. Let this article serve as your guide, but beware the true killers of this island nation as well - the dreaded hoop snake!