The day has come and gone that the first cartoon mascot, Felix the Cat, made his mark on cinema 100 years ago. After appearing in 530 cartoons and two feature movies, Felix has drifted into the abyss of development hell since 2004. Meanwhile, Walt Disney's Mickey Mouse is the face of a company now worth 128.8 billion dollars (Dennison 2019). Did your stomach drop just now? Anyway here's the jazz on America's first anthropomorphic sweetheart and a scoop of history on the side. 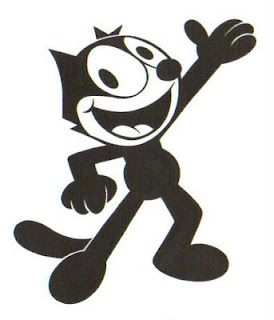 Felix the Cat first appeared as a curious kitty named Master Tom in 1919's Feline Follies. It's a simple, silent comedy film that ends with the cat committing suicide by inhaling gas fumes after he realizes he is the father to a litter of kittens. Say "yikes!". Anyway, all that takes place in about four minutes of run time. Contemporary audiences were quite entertained and the character caught on overnight. The short film's strange premise, familiar setting, and surrealist humor was new and exciting. It seemed the cartoon genre had finally evolved. Below is a YouTube link to the short. It's definitely outdated, but you may find it interesting nonetheless.


The true originator of our hero is disputed. Pat Sullivan, the namesake of the cartoon studio that released the short claims sole responsibility in the cat's design. Lead animator Otto Messmer, similarly claims he came up with the design and created the cartoon himself at home. But hey, a guy named Ub claimed he created Mickey Mouse so who knows. The debate has even escalated to including comparisons of the two's handwriting and tendency to use certain words.

In the next ten years, Felix starred in 168 cartoons by four film distributors.He even met Charlie Chaplin. At one point, new Felix shorts were being released every two weeks or less. For reference, the average ticket admission price in the year 1919 was 7￠, or when adjusted for inflation, one penny (Dave Manuel.com 2019). Here's some quality titles from this period:

While these titles are hilarious and the impact of these cartoons are innumerable, this doesn't excuse some of the blatant racism on display in some of these creations. As with all things Club Dusey, being able to recognize the context of these items is key. American theatre wasn't exactly inclusive in the 1920s, and being able to learn from these mistakes is the goal. Since cartoons were still primarily for adults at this time, mature themes like alcoholism, racial strife, and suicide were not uncommon. It's truly strange to revisit in the 21st century. Now, back to the article.

For something that's now still recognizable after a century, Felix's popularity mostly peaked four after its initial debut. Felix became among the first characters to have heaps of merchandise sold everywhere and pop culture references abound. He was the popular subject of many jazz orchestra tunes. He may have also inspired the Kit-Cat Clock, which is fucking awesome. Felix's design, personality, and personification also single-handedly carved the destiny of cartoons. Without him, there likely is no Mickey Mouse. OR Sonic the Hedgehog. Fleischer Studios was amongst the first to jump on the wagon in 1921, with characters like Bimbo (who is a shameless Felix rip-off) and Popeye the Sailor. Disney, Sullivan, and Fleischer all left unique imprints, some of which will be explored in future Club Dusey episodes. Many of them maintained popularity through the duration of the 20th century. The popularity of this art form has recently been revived in the video game format through titles like Cuphead and Bendy and the Ink Machine. 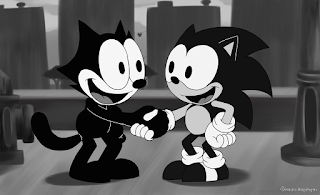 By the end of the 1920s, Felix's appearances and sales began to sink largely in part to the rise of sound technology and Pat Sullivan's reluctance to adapt. It's very Sunset Boulevard-like. Walt Disney Studios, however embraced this new dimension and soar to new heights at the cat's expense. However, Felix the Cat comics, written by Messmer himself at its inception, ran for over forty years with continued success. 1954 saw Messmer's retirement and replacement in the form of Joe Oriolo, an established writer who had already been a co-creator of Casper the Friendly Ghost in 1939. In the 1980s, there was also a crossover with Betty Boop that ran three years. Felix was briefly brought back in 1936, ironically copying Disney's styles as Disney had once done to them. This stint however did not click with audiences, and Felix was placed on the shelf for nearly twenty more years.

A fine example of Felix cartoons in the twilight of his biggest success period, Eskimotive (1928).


By 1953, ownership of the cat character had passed to Pat Sullivan's nephew. Aforementioned comic writer Oriolo secured a detail to bring Felix back to television after so many years, this time with a major overhaul. Felix now wields a magic bag that alters and creates matter to his liking. It works quite a bit like the quirk of Momo Yaoyorozu. The show was geared towards children too, so the suicides per episode went to pretty much zero. Felix outwits other people trying to steal his bag for about 260 episodes, which probably got pretty old. In my impressions, the show seems to bumble clumsily and slowly. It's certainly a product of its time.

One of the better clips I found from this period. Uploaded by YouTube user Screenblaster13. It's Felix the Cat and he's here for you :)


Oriolo had gained complete control of the character by the 1970s and proceeded to market the crap out of it until he passed away on Christmas Day of 1985. Ownership passed to his son, Don Oriolo, who shared an equal passion for the property. Don Oriolo was responsible for Felix's push into Asia, where the feline is now an icon in the Chinese entertainment market. He was also a credited instrument of fame in the music industry, working for RSO Records. Don is responsible for signing Jim Steinman and Meat Loaf to a deal, and for co-writing the fist charting hit of Jon Bon Jovi's career, a christmas song about RD-D2. In 2010, Oriolo founded a guitar manufacturing company. Many of their models feature the smiling face of Felix. I invite to glaze overt their electric collection here.

In 1987, Felix the Cat: The Movie was released...but not in American theaters. This ambitious release, described as an "American-German-Hungarian-Polish-Bulgarian-Canadian film", ended up as a passion project turned dumpster fire. It grossed less than $2 million dollars on a 9 million dollar budget. It wasn't available in the U.S. until it was distributed on VHS. Despite its poor reception and net loss, the series did not remain dormant for long. The Twisted Tales of Felix the Cat began airing in 1995, and Baby Felix in 2000. Baby Felix caught on in Japan especially, where they developed a baby Felix tennis video game. After some floundering in the markets and a failed attempt to revive the cat on Cartoon Network, the film rights to the character have been sold to DreamWorks animation, who have expressed interest in producing a film, now one hundred years after the first cinematic releases. Hard to believe even now, he still has nine lives!

Here's to a century, and maybe another one. There's a lot of history to be seen, both good and distasteful. It's important to both celebrate and criticize the historical evolution of theatre depending on its context. Racism in the industry still exists so some degree. But remember, racism is plain paw-ful!Thanks for reading, see you in 2119. 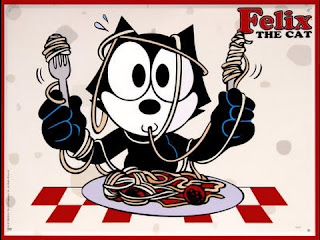 If you liked this article, what else should we spotlight from the early cartoon world? Discuss and follow on Facebook @ Club Dusey.

Dennison, Sean. “How Much Is Disney Worth?” GOBankingRates, Toggle Navigation Back, 15 Apr. 2019, www.gobankingrates.com/making-money/business/how-much-is-disney-worth/.
“Felix History.”

“The Cost of a Movie Ticket Throughout the Years.” DaveManuel.com, www.davemanuel.com/the-cost-of-a-movie-ticket-throughout-the-years-166/.