Good day, ladies and gents. In our inaugural lit review, we will take a hard, grease-stained look at a serious piece. In a strange twist of fate, Club Dusey will look at literature with a no-nonsense, politically appropriate lens for once. Prisoner on the Hell Planet rocked my core so fiercely that I knew I had to give this underground hit some legs to stand on. Look at that, we even have a thesis! Here is a quick reminder that I do not own any part of this writing, and my dumbass couldn't have written it anyway! Let's dig in! These reviews will have no Dusey-O-meter rating, because literature is complicated and wonderfully subjective. Let's just focus on learning something and feeling something. Without further ado, welcome to the next wave of madness.

Prisoner on the Hell Planet, a brief graphic depiction of writer Art Spiegelman’s trauma following his Jewish mother’s suicide, features many subtle and inconspicuous glimpses into the relative dysfunction, emotional disconnection, and cultural contrast between the life of Art’s character and that of his parents, both holocaust survivors. These “familial fault lines” would have immeasurable impact on Art’s work and late 20th century holocaust literature, prominently being featured in his lengthy magnum opus Maus (1991).


You WILL need to zoom in to read these! 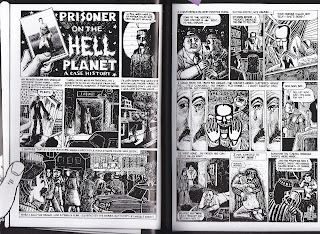 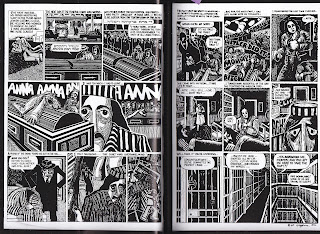 You WILL need to zoom in to read these!

The short biographical Prisoner on the Hell Planet, first published quietly during the underground comix scene of the mid-1970s, begins telling the story of the Spiegleman family before the narrative even begins. The titular panel features only three distinct elements that with a closer look, begin the story. These components are basically seen as this: the title, the subtitle (A Case History), and a large hand grasping a black and white photograph taken at Trojan Lake, New York. Upon closer inspection, the picture displays a small boy being held intimately by an older woman. The child can be seen with a clear grin, whereas the mother looks anxious. Bluntly enough, it is revealed in the very next panel that the mother had recently committed suicide with no explicit explanation. The impact of this juxtaposition was likely a conscious effort by the writer, as the emotional static it provides is succinct and immediate. This pulls the reader directly into the hell planet next to Art, eagerly searching for a satisfactory explanation that neither the author or the audience would ever receive. The year was 1968, twenty-three years following the death of Adolf Hitler and the secured ally victory. Unfortunately for the Spiegelman family, Hitler’s influence will live on for many decades following. The primary victims of this lingering horror would be none other than their emotional and mental capacity, even decades later. At this point, Arthur had become fully grown at the age of twenty and capable of creating his own prison of thought. So why now, so long after the end of the holocaust?

The first clue the reader receives as to the stark disconnection of Arthur’s ties to his parents is linked to his father’s discovery of Anja’s bloody corpse in the bathtub. In the panel art below the text, Vladek reacts, Oy Gott!”. This is a Yiddish exclamation, the first instance where the terminology utilized by both surviving characters is highlighted as distinct and uninherited by Arthur, who had been an American since the age of three. Next, Arthur reveals almost reluctantly that he had agreed to live with his parents upon his release from the asylum. He does not appear to be relieved to have refuge in their home, perhaps even himself insinuating that his stay away at the institution played a pivotal role in her untimely death. It is likely that his weekend with his girlfriend acted as an escape for him away from the guilt he experienced at the hands of his parents’ hospitality. Arthur feels he is a burden to them. In his mind, his troubles could never compare to theirs, despite the immense pain he experiences daily. The main character remarks his parents never cared for his girlfriend anyhow, building further resentment on both ends. Arthur, in addition to playing the role of prisoner to his mind, thoughts, emotion, and guilt, is a prisoner to his assumed role of a burden to those around him.

A crucial detail in the large panel that distances the entire bottom length of the page is the protagonist’s inkling of the events that occurred when he sees the commotion. Arthur feared the worst, but made a conscious effort to block these thoughts. One has to consider the possibility that Arthur suspected her demise long before it had been committed. This will be evidenced in Arthur’s memories of their final meeting.

After Doctor Orens reveals the true nature of the event, Arthur silently narrates that he didn’t feel like crying, but felt compelled to. An interesting note is that while Vladek, father to Arthur, is the first to discover the mother dead, the doctor is who informs him of her fate. This is very strange given the implied closeness of their relationship. His father seems to find great tragedy in the detail that Anja had not left a note. 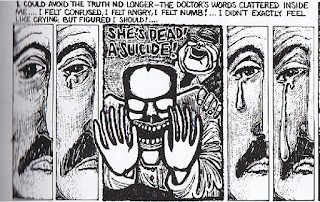 Nearly the entire third page of the reading is a case study in detecting cultural fault lines experienced by both father and son, and the resulting disconnection as a result of Vladek’s closed off personality. In the first panel, Arthur’s father insists that they sleep on the floor. He infers that perhaps it is an old Jewish custom, but diverts no further as he does not understand the request any more so himself. This exemplifies both the foreign relationship between Arthur’s ancestral faith and his father. Beside bloodline alone, the singular shared bond of religion between the two is mostly obscured by the son. This point is illustrated throughout this page’s print. Vladek cried out in Hebrew and Yiddish at the mother’s funeral, where Art recites from the Tibetan book of the dead. He mentions he was “pretty spaced out in those days”, highlighting his indifference to either source, another example of his lack of common ground with his dad. He had no direction and had no inclination to believe in much else. During the service, Vladek cries out very emotionally, juxtaposed with Arthur’s melancholy. Deep inside however, he is seething with overwhelming guilt. Arthur’s grieving is internal, as opposed to his father’s outward projections of mourning.

Arthur’s reasoning for her death stems from many origins, but he cannot help but to arrive to a common consensus: that his own actions played a vital role in driving her to suicide. It seems the resentment between them was two-fold; Art always felt that his mother was too overbearing, as evidenced by how he compares her grip to that of an umbilical cord and that his mother similarly felt that she could never satisfy the needs of her son, feeling as though she were a burden. Interestingly, the title Prisoner on the Hell Planet feels as though it could reference mother or son. Art’s resentment of his mother Anja only grows following the guilt placed on him by her passing and the unkind “condolences” provided by family friends. This culminates in Arthur’s final scorn for her, that she has gone to a better reality than him, and placed the burden of a desperate life on his shoulders. Arthur feels that she has gotten away with a terrific crime by ending her life and leaving him here – a prisoner. After all, Arthur is an inmate to his own unfortunate relationship with his father and mother. The second panel on the final page depicts Art’s mother reading him a story in bed. He cannot be older than ten based upon the illustration, but one detail is clear: he is still clad in a prisoner’s jumpsuit. He has likely felt this way for most of his life, an extension of his mother’s trauma rather than a unique individual. Another dimension to this final grievance is that it assumes Arthur feels his mother timed her death so that he might be the one to discover her corpse – luckily or unluckily as it was, he had been running late. This relationship continues through death for him and plagues him long after her passing. 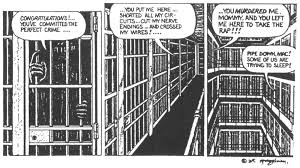 Anecdotally, Spiegleman felt much of these feelings in his own life circa the time of the comic’s publishing in 1972. Survivor’s guilt is a recurring and poignant theme presented through the course of Maus. There are a few bits of contextual information not mentioned in Prisoner on the Hell Planet from Art’s personal life that may shed light on his inspiration for the short piece. In addition to Art’s recent discharge from Binghamton State Mental Hospital, Anja’s only surviving brother had recently passed away, another contributing factor to her depressive issues. On the opposite end of the spectrum, Arthur may have resented his parents for another unnamed reason. During the events of the holocaust the Spiegelman’s had sent their only son at the time, a boy less than five named Rysio, to live with an aunt. They had feared for his life following the surge of extermination camps rising through Europe and aimed to give him the hope, safety, and stability they could not afford. While peaceful for a time, the Nazis advanced further and the aunt made a bone-chilling decision to deny their captors. She had poisoned herself and the small boy to avoid their inevitable capture. In Maus, Art mentions that at times in his boyhood he felt inadequate because of the innocence his “ghost” brother had left with. Being a small child with a small ability to create complex trouble, Art felt that his brother would forever be seen as pure and perfect. Rysio was something Art could never be because he had no time to make mistakes (Hirsch 2011).

Maus was revolutionary at the time of its release because of its unique perspective and creative personification of the gruesome events that unfolded in a manner altogether too real. While Prisoner on the Hell Planet is only a small component of this graphic text, it includes an even darker and more malicious side of the legacy left behind. Most notably, the traumatic lingering of Hitler’s evil deeds continues to plague others even today. The dysfunction of Arthur’s familial surroundings created an unfair gap in understanding and built permanent fault lines between his father and himself. Fault lines that may just have killed his mother and granted Art an extended stay at the asylum. These fault lines are the basis of all of Art’s works that stem from autobiographical experiences. From the underground comix scene of the 1960s and 1970s, his big breakthrough graphic novel, or his reflective works dating into the 21st century, Spiegelman has crafted a story of a paranoid father, an unstable mother, and an anxious son. In conclusion, these aforementioned characteristics and story elements included in this brief comic are case study examples of dangerous fault lines borne of a terrible tragedy that tore families apart and changed historical literature forever. Also, fuck Hitler.

What are your thoughts on our inaugural Lit Review? Suggestions? Roasts? Pls respond. I hope this piece resonated with you like it did me and changed your perspective of an untold tale so long after the Nazi flag was torn down from inside the walls of Germany. What are some short comics that spoke to you? What should we discuss next? Thanks for coming to class, as always.