Dartmouth College is the ninth oldest center of higher learning in all of America, first opening its doors as a means of christianizing and westernizing native american peoples. It is now an acclaimed Ivy League institution after its name surged to the top near the turn of the 19th century and remained there ever since. With many progressive schools of thought, Dartmouth quietly dismissed their Indian mascot in 1973. Unlike their contemporaries however, the college never looked to replace him...until 2003. Enter Keggy. 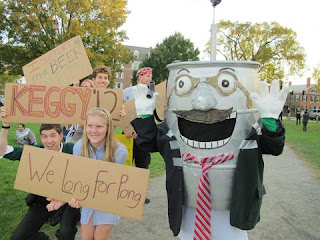 In the small town of Hanover, New Hampshire lies an esteemed university that has made the town its home since 1763, steadily fixed along the Connecticut River. Sporting a population of 11,000 citizens and an undergrad team of only about 6,500 students makes it a pretty reclusive college village where news doesn't often leak itself. After varying enthusiasm for both embracing and denying its own history with the native people of the area, Dartmouth's decades long battle to reinstate a mascot has gone largely unsuccessful. The institution has decided rather to throw up an uninspired letter "D", and the very unique catchphrase "Big Green", which reminds me more so of an unpleasant experience at McDonald's than an intimidating nickname.


In the second semester of 2003, the college's student assembly group decided that it was high time to correct this absence and elected upon constructing a poll to determine a new animal representative. The poll refused to include the long deserted indian mascot despite its still sizable following, instead opting for relatively innocent characters like a mountaineer, a dragon, and even a pine tree. The second place runner-up was none other than the moose, receiving nearly a third of all tallied votes. Why isn't the moose the mascot today? It was out-voted by the final option, a small bubble reading "none". So, the quest continued. It was already too late to tone down discussions from the student body after the topic arose; some writers of the college's satire newsletter the Dartmouth Jack-O-Lantern felt they had a solution. The goal, in the words of Nic Duquette and Chris Plehal, was to create a mascot that wasn't hateful, but could never be accepted by an Ivy League school. What they created was an anthropomorphic beer keg, named Keggy, who became an overnight sensation. Plehal and Duquette had succeeded, even if the Dartmouth reported mixed reactions. Many expressed concerns that the college's administration would indirectly punish them for their new representative. 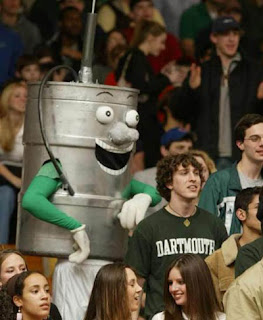 The 2004 student body president, Janos Martin, was quick to "unofficially" endorse the appearance of the mysterious new mascot and encouraged him to continue participating in that year's football games. The student body was however mostly consumed in talk concerning the excessive use of force by campus security at the time. 15 years later, Keggy has gone to accrue national fame and a fierce camaraderie with big green students. He has since been crowned by Yahoo! as the most interesting college football mascot (the article has since been deleted), in addition to being called "a stupid beer thing" by Michael Wilbon of ESPN's Pardon the Interruption. This of course means Keggy beat out Artie the Artichoke, Big Mo the Biscuit, Wolfie the Seawolf, and Bo Weevil of Enterprise State Community College. 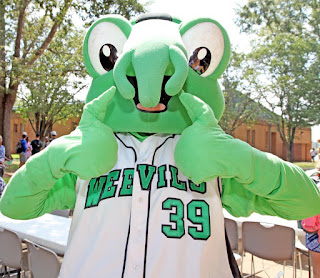 Perhaps the most riveting tale of Keggy's adventures occurs in December of 2004, not long after his introduction. Keggy had been kidnapped from the Sigma Nu fraternity's library, where creator Chris Plehal had stored him temporarily while cleaning. After two days of endless local searching, an announcement of the mascot's disappearance reached The Dartmouth. Later that afternoon, an unidentifiable email address from hotmail sent the Jack-O-Lantern an ominous and darkly lit photograph of the Keggy costume bound and gagged, advocating for the end of the witch hunt for his captor if they wished for a safe return. Students initially assumed this act was a clever ruse to gain publicity, but Plehal revealed that his whereabouts were truly hidden and a police search had been conducted to ascertain details. Keggy had only been active roughly six weeks. In response, the Jacko crew sold nearly 800 t-shirts and raised $4,000 in an effort to repair minor damage that had surfaced on the costume once it was safely returned. The costume disappeared under similarly strange circumstances in the summer of 2008.

All in all, Keggy is now a staple of the Ivy League college's athletic billings and festive events. When Keggy was denied entry to a team hockey outing, the college's newspapers exploded with anger. His popularity has continued to grow, for better or for worse. Perhaps, Hanover needed some excitement. You know, a workingman's mascot. Not bad for an anthropomorphic beer keg. Shine on, you crazy diamond.

Did you enjoy this article? Want more mascot material? No? okay, see ya next month 😉

Please check out these sources, big shoutout to the archives at the Dartmouth. Couldn't have done it without you.