This may be the greatest headline to grace this silly website, so please take a short moment to reflect upon what led you here. Filled with shame? Good, let's continue. Today we bring attention to a very good boy named Wojtek who served the 22nd Artillery Supply Company of the Polish Land Forces. Welcome to the official respect thread, please take a moment to have your day made and mind possibly blown. Only facts from here on out. 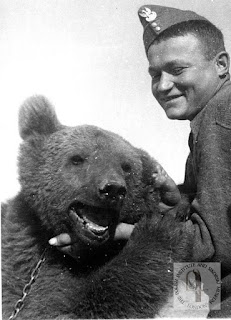 Following the ghastly 1939 invasion of Poland by the Soviet Union, thousands of Polish civilians had been forcibly displaced or deported to parts of the USSR. In fact, the Soviet Union became quick to denounce the existence of the Polish state at all, officially at least. A rowdy group of men placed in POW camps across Stalin's empire had been released following an amnesty agreement between the two nations, and under the leadership of General Wladyslaw Anders subsequently formed the bulk of the Polish Armed Forces in the East.

One day in April of 1942, Anders' Army was stomping around Hamadā, Persia (present-day Iran) when a group of soldiers met a young boy who strangely happened to be in the possession of a bear cub, held tightly by a makeshift collar and leash made of rope. The cub had recently been orphaned when its mother was slain by hunters nearby. Irena Bokiewicz, a civilian refugee, loved the beast from first glimpse and convinced the acting lieutenant to purchase the baby bear. The boy reportedly accepted an offer from the lieutenant consisting of a mild pack of cans containing corned beef. At this point in the story you have to wonder in what reality they could have made this work or even have been allowed to get away with it, but it gets even better.

The young bruin, now bearing the traditional Slavic name, Wojtek, meaning "happy warrior" spent near 90 days in a refugee camp outside of Tehran, the modern capital of Iran. He was apparently spoiled quite rotten by Irena, who continued to act as his primary caretaker until the big brown boy was donated to the 22nd Artillery Supply Company in July of that year.

Here is where our little friend's life changed from that of a pet to that of a soldier. Wojtek, who struggled to swallow most of the rations available to soldiers became dependent on milk for sustenance. It was often served to him via old Vodka bottles. Like the Pooh bear of legend, he also grew to like honey and syrup, marmalade, and other sweets. He was often given special treats like beer and cigarettes, making him famous across Poland. However, Woj much preferred to eat rather than smoke his nicotine products. Wojtek eventually grew to nearly six and a half feet tall and clocking in at five-hundred and fifty pounds. He loved to wrestle and several photos exist of him in the act of play fighting with soldiers. There are no documented cases of him ever causing harm to one. The beast was often described as too gentle to hurt. Woj liked to sleep among the other soldiers and cuddle for warmth during the colder nights. 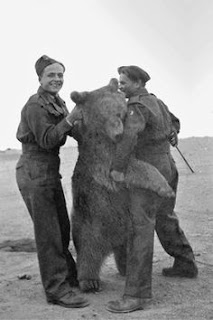 According to the blog hosted by the British Library, Wojtek's biggest mishaps were small gaffes that included stealing women's underwear, wrecking a camp storage unit in search of jelly, and a rather uniquely heroic plight. The bear took quite a liking to showering, and when water got short his bath time took a hit. One day, he had enough and broke into the bath house to find an Arabic spy waiting for him. He was quickly caught without losing an arm or leg.

By 1944 as a now a seasoned warrior, Wojtek was poised to be transferred to serve in Italy in alliance with a British joint campaign. Some issues arose with his travel pass and he was officially enlisted as a private in the armed forces to satisfy the needs of his permit. The 22nd had managed to convince the powers that be Wojtek was necessary to maintain morale and strength in the company. In his honor, the league designed a logo to commemorate his service. The official emblem is pictured below. 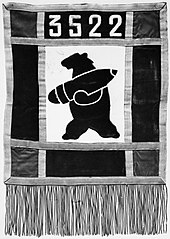 Now an offical soldier, Wojtek soon recieved his own serial number and salary. He slept in tents along with his fellow man just like any other fighter. Just as the bear was accustomed to his new life in Italy, he became confusedly involved in the famous Battle of Monte Cassino, a series of ally attacks poised to open a path to Rome. During the heat of battle, Wojtek noticed his comrades struggling to load ammunition boxes and lent his gift of strength once again. The boxes, weighing one hundred pounds and loaded with artillery shells, were a great obstacle requiring the effort of four men to relocate. Wojtek of course could lift one by himself with ease, and continued to load throughout the conflict, without dropping or misplacing a single unit. Cannons blazed in the foreground, but he did not slow. For his brute force and valiant effort, Woj was honorably bestowed with the rank of corporal. In April of '45, the 22nd fought in the final stop along the Italian front, the Battle of Bologna. Within the next year, the campaign was dismissed and Wojtek was free of his military service. The brave beast was sent to live out his days in the luxury of one of Scotland's finest zoos, this one having been located in Edinburgh. According to Aileen Orr, who grew up around the bear in Scotland, Wojtek became a local celebrity. He was cordially invited to concerts and dances, which he happily attended. Aileen would later write a book about the hometown hero. Thanks to the power of the media and his budding appearance on a British childrens' show, the bear had grown quite popular around Europe, becoming the zoo's main attraction. Guests were sometimes permitted to feed him cigarettes (it was the 50s, so who knows). It is said that the old bruin's ears would perk up whenever he heard Polish spoken. He lived happily in the confines of his domain, and passed away quietly in November or December of 1963, depending on who you ask. He lived nearly 18 years after the end of the war, totaling nearly 21 journeys across the sun total.

Bearing (pun alert) quite a proud legacy, Wojtek is commemorated in a number of venues around the old country. A sculpture in the Sikorski Museum of London shares his resemblance. In 2014, a statue was erected of the bear in Kraków, Poland's second largest city. Another memorial was similarly constructed in Edinburgh. His popularity has recently resurged in conjunction with the release of his own feature BBC documentary. Wojtek has had a share of influence on fantasy board and video games as well, given his inspiring role in both history and legend alike. 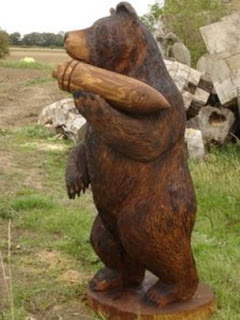 Yet another tribute to Wojtek in Grimsby, Lincolnshire

As we recall one more time how unbelievable this story is, I ask that if you liked the article to comment what it was that stood out to you. Would you like more history content? Perhaps animal articles? It's okay, I know you want more animal articles. As always thank you for reading! This one's for you Wojtek, silly soldier. 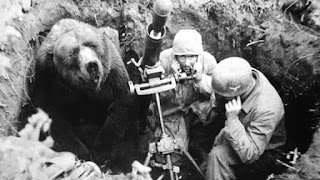 For more information, please check out these sources!