Here we are living in 2019, a modern dystopia and reviewing a movie that takes place in a fictional 2019 dystopia. Phew. However, the capsule gang's commute is probably a little more aesthetic than yours. Today Club Dusey presents one of the most beloved cult anime classics, the manga adaptation of Akira. It's got that 80s charm you crave and its laced with heavy cultural commentary without being in your face. Warning: it will make you wanna buy a leather jacket, but are you cool enough to wear it? 9/10. 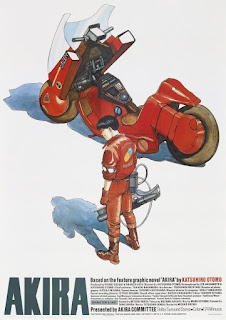 Both the 1988 film and its source material manga hold special places in the progression of media culture worldwide. It's also true that its production was a landmark feat for a number of reasons. Reading about the movie is also just as exhilarating as viewing the finished product, but I suppose that's why I feel inclined to write these movie reviews for free. Conceived by writer Katsuhiro Otomo at the very beginning of the decade, Akira's success as a paper product published in Young Magazine led to the development of a full length anime adaptation. The original run began in 1982 and continued into 1990, eventually amassing over 2,000 pages of action before it concluded. It became among the first Japanese comics to receive a full English language translation release, being published as a six volume collection by Marvel Comics in the United States, which is pretty impressive. Creator Otomo himself directed the film as well as developing its screenplay. After its release and the end of the manga's serialization, Katsuhiro mostly abandoned the media to transition strictly into anime production given the international success of the screen recreation.

The most expensive anime film ever produced at its finish, Akira cost the Toho Company over one billion yen, approximately 9 million US dollars. The film held this distinction for many years until the advent of Studio Ghibli's long run of high budget releases. Interestingly enough, Katsuhiro Otomo would break this record again with 2004's Steamboy. This unprecedented budget proved a warranted risk, as the movie went on to make $49 million back. Akira continues to be re-relased on many platforms, performing well on VHS, DVD, and BluRay in its time. A live action adaptation is currently being helmed by Taika Waititi, director of Thor: Ragnarok (2017) and set to premiere in 2021. As far as reaping the benefits of its monetary surplus, Akira took advantage of the most innovative techniques available. The film was among the first to include "pre-scored dialogue", meaning that the voices were recorded firstly so that the lips of the characters would later be animated to fit the sound, as opposed to the commonplace standard of the opposite order. The soundtrack was completed in a similar manner -  the composers never saw a single shot of the movie before finishing the music. The movie's animation quality itself is amazing, rivaling western entries that were released a decade later, on par with films such as The Iron Giant (1999). It's said that well over 300 colors were used, 50 or so of which had never been seen in an animated film. The budget allowed for experimentation with untapped CGI technology, and incredible frame rates. Akira featured over 160,000 still images, almost triple the standard for a similar project. A defining depiction of cyberpunk, the movie draws allusions to 1982's Blade Runner and sets the stage for future entries in the genre, both on the screen and in your local library. Enough of that nerd shit though, let's talk about the movie.

The movie opens with a shot of a powerful blast devastating Japan in the year 1988, quickly transitioning to the current year, 2019, a cyberpunk haven of gang warfare and acts of terror, accompanied by crooked politicians and militant unrest. In a world dominated by vigilantism, young Shōtarō Kaneda leads a biker troupe called the Capsules, comprised of his best friends Tetsuo Shima, Yamagata, and Kaisuke. Shōtarō is easy to anger, but proves himself to be brave and honorable towards his brothers in arms, many times displaying his devotion and respect to them. He is a skilled leader and driver, as well as combatant. Kaneda is pretty quick to respond to adversity with violence in both the physical and verbal domain. He's also very stylish. One of the key elements of his character is his love for his custom made bike, a red spinner filled with stickers for name brands such as Canon. He's quite likable. 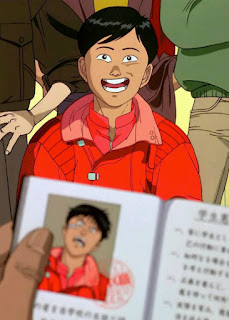 Kaneda's more juvenile friend Tetsuo is his closest pal, but he carries symptoms of a "little brother" complex, and resents Kaneda for his tendency to act like a hero when he needs saving. After Shima nearly crashes into a small green boy following a gang-related attack, things start to go downhill for him pretty quickly. After a strange collision with a small green boy, Tetsuo and the rest of the gang are apprehended. Tetsuo is brought into the hands of a government sponsored laboratory to be experimented on and studied. It is revealed that the boy has a prodigal potential in the arts of psychic power. The project is overseen by Colonel Shikishima, who later becomes an integral character. Meanwhile, Kaneda and the boys are entrapped in a local prison and harassed. They later escape due to the wit of a young revolutionary girl, Kei. She is a member of a small-time resistance group, and it's implied that Kaneda has eyes for her. In any case, the posse journeys on and quickly reconvenes with Tetsuo, who begins acting strangely and violently. He develops migraines and acts irrationally. Testuo is rushed back to the hospital to continue his treatment. From here, thing get weird. The small green and pink children from earlier are revealed to be telekinetic as well, to a lesser degree. Tetsuo mistakes them for stuffed animals come to life and dismantles them in rather dominant fashion. Kaneda and Tetsuo once again meet here, where the latter activates the full extent of his power and nearly kills Kaneda. It's here that Tetsuo begins to realize his ultimate strength and flaunt it about, knowing that he is unstoppable.

After being undermined by government officials and feeling as the only one who understood the gravity of Tetsuo's powers, the colonel stages a coup to assume full military control over Neo-Tokyo. Tetsuo aims to dig up "Akira", who is revealed to be resting below the Olympic stadium. Oddly enough, in our reality Japan is hosting the 2020 Olympics, exactly as it in this decades old manga. Akira is described by Kei as "ultimate energy", in a complicated, long-winded, and incomprehensible monologue by Kei. Embedded is a YouTube link to the scene.

Now up to this point, it's never truly mentioned what or who Akira is. The movie slowly builds towards the inevitable reveal, cleverly leaking details along the way. Tetsuo, who is now pure evil, dons a bright red cape and causes destruction wherever he goes. Also he flies now. After killing fellow gang member Yamagata, Tetsuo sets his sights on Akira. News of Yamagata's death at the hands of their former friend, Kaneda swears to exact revenge. Firstly however, he must "send Yamagata his bike". In doing so, Kaneda rides the two-wheeler deliberately into a wall where it explodes. Simple. Dumb. Awesome. After recovering the remains of Akira (vials and bottles with no body), Tetsuo begins to build his throne. He is met with basically no opposition, until Kaneda makes his way the place his destiny lie. Kaneda, who should stand no chance of smelling survival, uses a laser gun to zap off Tetsuo's arm. Kaneda and Tetsuo engage in a war of words, where he retorts that its "Mr. Kaneda to you" in a truly sorry series of insult. What should be a small victory become moot after Tetsuo froms a new one from local metals and presumably alloys. As the colonel arrives, Tetsuo begins to lose control as his powers continue to grow, eventually exceeding his limits. Tetsuo's body begins to contort and expand in strange twists until his person devolves into a horrific Lovecraftian nightmare. Tetsuo calls for help as his power manifests as a vacuum, pulling in Kaneda and Kaori. As the mass contorts, it graphically crushes Kaori in a brutal off-screen death. In a hopeful psychic ritual, the espers are able to summon the help of Akira to rather bittersweet results. Both Kaneda and Tetsuo are transported to another dimension. Colonel Shikishima is teleported far away and Tokyo explodes...again. It's now known that Akira also caused the bombastic discharge that opens the movie. The film gives you one last backstory nugget, broadcasting images of Kaneda and Tetsuo growing up as friends, with Kaneda acting as a kind brother and positive role model. The three strangely colored superpeople are also found to be experiments of the government, innocent children who were taken to be studied, most likely as weapons. After this nice heartfelt rewind, the three psychics aim to save Kaneda and pull him back to reality, even as they realize they cannot return. Afterwards, the fates of the characters are outlined, highlighted by the escape of Kaneda and Kei. Kei is developing special powers of her own, and the espers assure Kaneda that Akira will be taking care of his friend from now on. In another plane of existence, impossible to know her on Earth, Tetsuo is heard alive and mentally sound.

So that's the flick, and here's my conclusion. The movie is great, no doubt. One thing that truly separates this anime apart from many modern sci-fi flicks is that the movie never insults your intelligence. There is no unnecessary exposition that takes away from the action. The action and story move fast and you are taken along for the ride, as opposed to being spoon-fed the deets. The movie is angsty as hell, so take that as you will. Some will love the tone, some will inevitably tire of it. The sudden flips between bloody violence and childish antics is sometimes jarring, but it keeps the viewer grounded and reminded of the consequences following the events that lead to a dystopian Neo-Tokyo. The dub quality is hit or miss. The voice actors are appropriate and talented, but the animation does not always serve them with dutiful compliance. This error is not present in the original Japanese release. The soundtrack is barbarically simple, but driving and exciting. Besides the natural cringe that comes hand in hand with angst-riddled cartoon, I have few criticisms to offer of Otomo's magnum opus. The movie and its characters are sometimes painfully over-dramatized, but it is common in the anime style and not as distracting as it would be in many otaku harem flicks. I think the manga could have benefited from a limited episodic series, a move I've surprised hasn't been explored. Some of the characters have unexplored potential and interesting motives. The resistance plays a minor role in the film and could be fleshed out given time and TLC. There are many instances of neat cultural metaphors that could be shaped to impact the viewer more intensely. Anyways, I'm sure I've made it clear how endlessly entertaining and undeniably important I feel Akira is to me and the world. What are your favorite Japanese sci-fi flicks? cartoon or not. Club Dusey will give you a spoonful of kaiju breakfast soon enough. Until then, keep pouring those bowls of Wheaties. Love you.