The Heart-Attack Gun and other CIA Shenanigans

The first time I heard of the infamous "heart-attack gun", I don't know what I pictured. Maybe a man shooting a wavey-type thing at a person like a Saturday morning cartoon? Unfortunately for ethics everywhere, the heart-attack gun is not an imaginary toy, but a real project developed by the CIA in the mid 1970s. While it may seem that Club Dusey is diving head-first into conspiracy theory nut-job territory, let's at least consider two things:

1. It was confirmed and discussed in detail in a 1975 congressional hearing
2. It's one of the most insane biological weapons either real or hypothetical that I've stumbled upon
3. 1975 was 44 years ago

All of those, especially the last one, are kind of scary to consider. So, let's consider away! 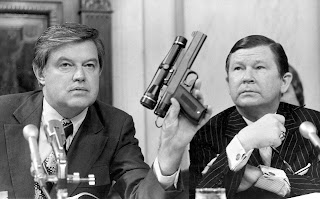 Frank Church pictured above with the prototype gun

Following the 1974 resignation of sitting president Richard Nixon, congress called for an investigation of the leader's reign and his handling of the power. One of biggest concerns of course being that some felt Nixon may have implicated the Central Intelligence Agency in his cover-up of the infamous Watergate scandal. While this meeting was filled with mostly forgettable monotony, one stunning revelation was made and featured on camera; the existence of an assassination weapon designed to imitate the effects of a naturally occurring heart attack.

This weapon would fire a nearly undetectable round of ammunition containing a rare poison that once penetrating the bloodstream would trigger myocardial infarction in the victim. Within hours, the poison would be flushed out of the system and unlikely to appear in a police investigation or autopsy. This leaves, as described, a dead person who appeared to suffer from a naturally occurring, matter of fact, heart attack. It's likely the firearm was developed in response to Cold War tensions and began with the U.S. biological weapons program, formed in the twilight of the second world war. This project helped study toxins that were least likely to be detected as one of its focuses, looking heavily into shellfish and other marine based poisons because of their likeliness to dissolve. The program itself would dissolve under Richard Nixon in 1969. It was vowed that all "offensive" biological weapon research would cease, given the matter of ethical concerns and general unreliability in warfare. It was succeeded by the biological defense program. The upside of these programs include the countless vaccinations that have since been borne of the research provided during, including those that counter anthrax, tularemia, and various fevers.

The above video, which can be found at military.com, has been used as the main resource for conjecture as to the details of this invention. A task force was formed the same year to oversee "rogue" activities by the CIA, informally dubbed the Church Committee and officially titled "United States Senate Select Committee to Study Governmental Operations With Respect to Intelligence Activities". Yeah, I know. It was chaired by the namesake Frank Church, a senator from Idaho, and published its final summary report in April of the following year containing the length of at least six books worth of findings. Along with the CIA, the committee investigated the IRS, NSA, and the FBI which of course have been involved in potential scandals many times over since. Ever hear of Edward Snowden? Anyhow, the committee found many other interesting tidbits during its inquiry, including the unveiling of Operation Shamrock and various plots to assassinate foreign leaders. President Gerald Ford tried with all his might to stop their declassification, but was unsuccessful. I highly recommend reading more into these investigations, because it may be years before Club Dusey can spell it all out for everybody. Oh, and check out HTLINGUAL for a good laugh.

While the heart attack gun is of course a small spoke on the wheel, the committee led to numerous debates on the issues of collecting intelligence which rage on over forty years later, dragging into the digital age. Unfortunately, not much more is really known about the gun aside from basement-dwelling conspiracy communities without much validity beyond conjecture. There are no other biological weapons akin to the aforementioned gun that seem as loony either. In any event, I hope this was interesting and ignites an interest in past government projects as well as current ones. Just don't google MK Ultra. If you enjoyed this short preview, let us know and we'll detail much more! Thanks for reading. 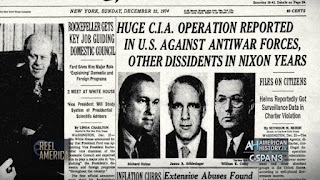