The Invisible Man is a film about a dude wearing pajamas with sunglasses and constantly threatening people while making crude jokes. Sounds pretty perfect, right? Well, I'd say it's pretty fantastic for 1933, despite some flaws that would damn most productions. Smoothly distinguishing itself from its Universal predecessors, Frankenstein and Dracula, this entry changes the game in its strange and wonderful tale of madness among its studio siblings. Let's discuss the least horrific of the classic monsters bunch, The Invisible Man. 7.5/10. 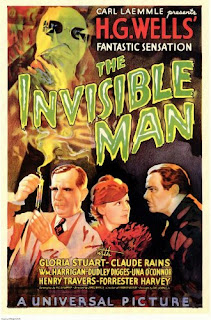 The Invisible Man is a difficult film to rank, begging a question Club Dusey is faced with all two often: Is a movie good because of its merits and craftsmanship, or because it is entertaining? Are the two mutually exclusive? I'll never know. Anyway, I'll lay out the pros and cons right away for you.

The movie doesn't seem to take itself seriously at some points, while also sporadically trying to sprinkle in some gravitas. There's a scene where he flips off a person's hat and giggles about it, and later the same man reminds Dr. Kemp that there plan involves indiscriminate murder - often. The movie wants to drive home the tragedy of poor Jack falling victim to insanity via the chemical monocane. This is all done to build sympathy for Jack's fiance and associates, but the audience has no sense of the person he is before the experiment alters him. It's simple to forget that the drug changes his behavior, and easy to think, "man, this guy is an asshole". Jack's true form is only revealed at the film's conclusion, on his deathbed. It's a wonder Rains went on to success, given his English-language debut showed his face for approximately 30 seconds. This is not to take away from his incredible acting, just shocked that his strength in disembodied voice work was enough to catch on.

The plot is for the most part rather dull. Jack disappears mysteriously and his blonde ladyfriend, a recurring stereotype it seems in 30s horror, grieves in his absence. After Jack return's home and makes a mockery of the locals in Iping, Sussex returns to forcibly employ the assistance of co-worker Arthur Kemp. The titular character borrows some jammies and reveals his plot to take over the world by force with no means except a partner and the power of invisibility. One of the many points where this sci-fi thriller feels like a Saturday morning cartoon, it may take some viewers out of their focus to hear something so corny in 2019. The rest of the film plays out as a quest by the police to catch Jack and apprehend him...and that's it. After my initial watch-through, I felt underwhelmed with the story because of its simplicity and lack of intriguing development, but it's difficult to argue the film isn't satisfactory in the department of pacing and entertainment. The movie itself is hilarious, even today. His antics are comical and his commentary is uproarious. My favorite is perhaps when he borrows an officer's pantaloons, which is much better seen than described.

Dr. Griffin decides to have some fun with the boys in blue

This film marks the monumental start given to Claude Rains in Hollywood, who later appeared in two more Universal genre classics The Wolf Man (1941) and The Phantom of the Opera (1943), the latter of which he starred in. Rains would go on to to become one of the most decorated actors the early 20th century, winning the Tony award in 1951, and being featured in several films still discussed 60+ years later. Among these titles are The Adventures of Robin Hood, Lawrence of Arabia, Casablanca, and Mr. Smith Goes to Washington. He was nominated for four Oscars. His IMDB page can be found here. Dwight Frye and Una O'Connor also appear, both staples of Carl Laemmle films. James Whale sits in the director's chair, also helming the first two Frankenstein films and other popular horror film The Old Dark House (1932).

The technical strengths of other comparative works of this time are the cinematography, camera angles and lighting effects, and the prowess of their cast. What other films may lack in these departments, they often make up for in impressive set designs. In this instance, the special effects are tremendous. The invisible man is convincing and his movements and costumes are smooth and believable. My mind was absolutely blown at the seemingly flawless "invisibility" of Rain's character. These effects were obtained through several painstaking processes including the use of wires, black on black color masking techniques which required special outfits, and splicing processes. These methods are now considered groundbreaking, where a team led by designer John P. Fulton is credited as the developers behind them. It's an esteemed filmmaker's wet dream.

The film is of course based loosely upon the 1897 H.G. Wells science fiction novel of the same name, with slight revisions in an attempt to modernize it and add more pizzazz. Notably, Dr. Kemp doesn't go flying off of a cliff in a screaming frenzy of hellfire. Expanding upon this premise, a 1940 sequel starring Vincent Price was released that is only distantly related to either previous iterations. Invisible Woman and Invisible Agent would follow. A remake was planned casting Johnny Depp in the lead role, but was subsequently scrapped in light of the poor reception and box office performance of the Tom Cruise led The Mummy reboot. Bold move to create a cinematic universe before even releasing the first film, but that's a dumpster fire for another time I suppose.

There is some debate as to the official genre of the movie, popularly categorized as both science-fiction and horror for various reasons. Many wikis refer to it as "pre-code horror" referencing works released between 1929 and 1934, marking the advent of sound in film and the introduction of censorship guidelines, respectively. While horror is generally agreed upon, it's difficult for me personally to call it one, given that the film features little hallmarks of horror and more closely aligns itself as a thriller. I think it may be called so because of its studio association with the genre rather than its own content. In any case, it's well worth viewing. If you feel like turning your brain off for a short time and taking a look into the past with a laugh, check it out. What Universal picture will be next? Text me in the comments, and check out our new Facebook page! 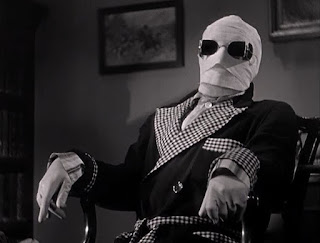