From director and writer George Lucas of Star Wars fame, Club Dusey presents the artisan's first feature length film, a spaced-out dystopian thriller that will make you think critically and also make your eyes hurt from seeing the color white so much. It's a thought-provoking journey with a unique perspective and futuristic atmosphere. Like a scary kind of groovy. 6.5 out of 10. 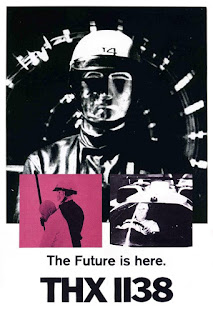 Adapted from Lucas' student film produced at USC, titled Electronic Labyrinth: THX 1138 4EB, the movie follows the plight of the titular THX desperately seeking to escape his confinement in the digitally constructed hell society of the future. Francis Ford Coppola produces. In the 25th century, life has become a uniform surveillance state akin to George Orwell's 1984. To stress this condition, citizens are assigned a three letter prefix and four number suffix as a name substitute, constantly displayed via a name badge. In addition, everyone's heads are shaved and common people are suited only in the most unfashionable color - white.

After debuting to a mixed critical reception and low box office performance, the film ascended to cult fiction stardom following the release of George Lucas' cultural phenomenon Star Wars (1977), where it became a staple of the genre. Here's what the hoopla is about. THX 1138 is a factory worker who assists in constructing police androids, who wear black and resemble a cross between the rebel soldiers from A New Hope and Michael Myers of Halloween. Theories that have arisen in response to the title character's name include that the seven symbols correspond to George's college phone number. Lucas himself has stated in interviews that he chose them because he liked the way it looked. In any case, the protagonist has little that stands out about him. He goes home and listens to the radio and jerks off, among other 25th century hobbies that can be performed under a tyrannical regime. On his way home from a hard day's work, he stops briefly for a religious confession of sorts in a room illuminated with the face of symbol 0MM 0000, a deity associated with the ruling party. 0MM urges THX to be very specific in his confessions and to be on his way with blessings of the state. However, the audience knows something THX does not, his roommate LUH 3417 is substituting his medication with other like pills that are altering his outlook. He becomes increasingly sick and horny, until the two begin to engage in a sexual relationship, which is outlawed by the state. After another citizen, SEN 5241, attempts to disrupt the housemates by filing to partner with THX, the jealous protagonist reports him. Unbeknownst to him, THX is also being sent to trial for his crimes of "sexual perversion". This ends with both gentleman being transported to a prison room, an endless and white plane of nothingness. LUH is seen a final time in motion, where she reveals to THX that she is carrying his child. She is later revealed to be destroyed after capture and remade into a fetus herself, which is much more haunting in your imagination than on your television screen.

During an attempted prison escape, SEN and THX stumble upon a dark-skinned man named SRT 5752, a self-proclaimed hologram. However, is it not so much implied as it is conjectured by fans, that perhaps SRT is not as counterfeit as he believes. One theory suggests that racial minorities were incorrectly labeled as holograms as a means of oppression, and as a metaphor for the feeling of illegitimacy associated with life as a minority. This explanation arose not only from context, but also as a reason for SRT's appearance featuring the only representation of his skin color in the film. SRT is a personality featured in holo-broadcasts, cementing his purpose to be used as an entertainer, and for nothing more.

After being barricaded in a monitor room and gently and sensually coerced (which is an accurate description) by android officers to surrender, the group becomes divided. SEN escapes to an area designated for devout worshipers of 0MM, where he incapacitates a guy and wanders into another area designed this time for children, where he is apprehended and presumably killed later. THX and SRT attempt to hijack some souped up future cars, where SRT crashes his immediately like a big dingus. THX fares a little better, weaving his way through intense traffic, android police chases, and later monkey-like creatures with poor special effects components. This final chase scene includes an impressive stunt credited to Duffy Hambleton, where he crashes a motorcycle at approximately 140 mph (or 230 km/h for my international bros). It's hard to miss when viewing because 1) it's awesome and 2) it looks like it should have killed him. According to legend, Hambleton walked away with only minor injuries along grumpiness from fear that rushing personnel checking on him may have ruined the shot. Nonetheless, THX overcomes them all and is faced with a final obstacle, a wall several stories high, with only a ladder to lead him. It very much resembles the prison that Bruce finds himself entrapped in in The Dark Knight Rises (2012). Most of the way behind him, THX is beckoned by pursuing officers to come back, urging him that this is his last chance. Just when the police are nearing, they receive a notification from a surveillance area that capturing THX is now exceeding their budget, and they turn back. It's unintentionally hilarious. A mere few steps later, our protagonist reaches the top, where he first sees the setting sun, as he looks out on a world new to his eyes and overwhelming with adventure, or something like that. 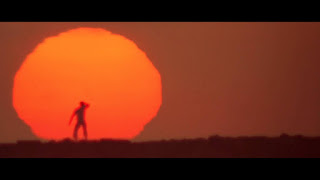 Now this movie is an interesting one and a captivating one, but it's difficult for me to classify as entertaining. The film holds a position that feels important and the atmosphere is grand. The beginning chugs along at a painful pace, but if you can make it to the mind-lock you are poised for a pleasant viewing experience. The premise is intriguing enough, but the execution is hit or miss. The subliminal context and symbolism is definitely a highlight, and the authenticity of the workers feels genuine. Sometimes, you have to coo back your willing suspension of belief, particularity in regards to how inept this totalitarian and futuresque ruling seem to be at times. The movie seems to ascribe to the notion of showing is better than telling, but it appears as though the actual visuals are missing substance or context at times. Overall, It's easy for me say that the film is a must see for sci-fi junkies like me, but I also recognize it isn't for everyone. Enjoy your day, because one day the future will come. Thanks!