Club Dead presents...Night of the Living Dusey! Or, something to that effect. Tonight friends, you are welcome to confabulate with me over a film that singlehandedly defined a still popular subgenre under the raggedy umbrella of classic horror. You may also hear the true underdog story of how a man with a dream made it happen. Night of the Living Dead is a class A example of how indie horror will always have a place in cinema and why. Easy 9/10. Remember...THEY'RE COMING FOR YOU. 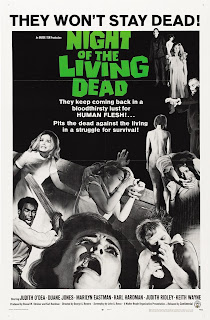 The feature length film, George Romero's first, was a passion project filmed for $114,000 on a farmhouse outside Pittsburgh, Pennsylvania. An independently made film, it went on to gross over $30 million, more than 250 times its original budget. The credits on the production end look quite a bit like Romero was the schoolkid who made the group project by himself. He is listed as the director, writer, producer, cinematographer, and editor. His co-author, John Russo, later became a rival of Romero, producing his own series of sequels bearing the name Return of the Living Dead, first released in 1985. Despite an initial agreement between the two to have their separate continuities in future installments, a session of legal battles were stirred between them after Romero felt the other's work was deliberately competing and plagiarizing his own. Russo's series was decidedly more humorous and saw a mountain of success on its own. George Romero's Dead films have since included five official sequels made over the course of the next forty years and two remakes, one directed by Tom Savini, a trusted collaborator of Romero, and a second in 2006 that just had to be released in 3-D for some god forsaken reason. It also gave me nightmares as a child. Let's dig into it.

Night of the Living Dead is one of those films that you just can't decide if they are cliche, or if they invented the cliche. Perhaps that is the genius of it. The movie opens with a driving shot that kicks off the opening credits. It's filmed in black and white long after the standardization of color, though it was still considered a pricey investment. Johnny and his sister Barbra (yes, i spelled her name correctly) are placing some flowers on their late father's grave as a favor from their mother. Johnny is visibly annoyed that he had to drive three hours from his hometown of Pittsburgh to this small town dump, and makes the entire process worse than it has to be. Tensions begin to build once Barbra's brother realizes that cemeteries still give her the creeps and he aims to tease her for it. He begins mocking her that a gentleman off in the distance is off to get her. As it turns out, the mysterious figure was actually out to get good ol' Johnny whom he swiftly kills. His sights are soon set on his victim's sister, who ditches her shoes and flees. She locks herself in the car, which proves no use after the brain-dead monster discovers that rock + car window = tasty lady. Not having the key, she releases the emergency brake which buys her some time until the car crashes and she races to a nearby farmhouse. Once inside, Barbra becomes an entirely different character. she is silent almost the entire duration of the film and seems to acknowledge very little of what is actually said to her. Her trauma consumes her, where she is haunted by Johnny's fate at the hands of the undead. Here she meets Ben.

Ben is the fucking man. He's capable, intelligent, and possesses leadership qualities that nearly could have saved everyone. Casting a black lead as a talented and smart individual in 1968 was a groundbreaking moment for horror and shocked me as a viewer in retrospect. Romero had for years denied that the movie contained any overtly political messages, but over the decades it has become clear that the film depicts several issues being highlighted during the time frame it was made, such as the cuban missle crisis and the paranoia of the cold war and Vietnam conflict. The civil rights movement and militarization of the nation, in addition to the faults of bureaucracy itself were touched in subtle ways somewhere in the midst of a indie movie about zombies. Anyways, Ben knows immediately how to insure their survival. He boards up the doors and windows, and safety proofs the farmhouse. Collecting food rations and fire tools, he is prepared to stay for a few days until a rescue team can locate them. Ben previously had a run-in with the ghouls and learned they have a sensitivity to fore and exploits it during the course of their stay. Ben and Barbra each detail their encounters in heart-felt monologues that make the story more human. After Barbra insists on leaving the house in a search effort for Johnny, Ben puts her insanity at ease by knocking her out ,which I don't condone, but proved effective.

Soon the radio signal comes through where it is revealed that an impossible event is taking place across the eastern United States - the recently deceased are being reanimated with the purpose of blood lust and murder. But why? One of the key elements of this film that make it so great is the long term, slow burn style of storytelling. The mystery of the cataclysm unfolding is done piece by piece, leaving both the audience and the film's protagonists in the dark as to the nature of this horrific night. Later, via television set, it is shown that more information is available, with none of it being particularly hopeful. The reanimated corpses of the dead are eating their victims. A strange aeronautical concentration of radiation may have played a part in this occurrence, and NASA is working to remedy this. However, safety shelters are being set up around the nation and there are several openings within fifty miles of the farmhouse. The television claims this is now the safest course of action. Here's where the asshole of the show, Mr. Cooper, gets his time to shine.

Mr. Cooper is the Walter White of the movie. It's been revealed another family of people have been hiding in the basement the whole time, including a husband and wife who hate each other, their sick daughter, and a young couple who are very much in love. Mr. Cooper is pretty much antagonistic from the start and warns Ben that if everyone moves to the cellar it will safer for the whole group and threatens Ben with violence if he doesn't obey his commands. Ben is of course undeterred. The young man, Tom, tried to reason with him to no avail. Eventually the two groups form a plan to escape. Mr. Cooper would distract the ghouls with molotov cocktail throwing while Ben and Tom gas the truck. It's a dangerous plan that goes dangerously. Tom's lover runs to join him and an accidental oil spill lights, burning and killing the couple in the process. Ben is surrounded by blood thirsty fiends and in a desperate escape, barely makes it back in the house. Mr. Cooper tried his best to keep Ben out. Ben finally has enough of his insufferable act and puts the old fart out of his misery. This is where shit really hits the fan.

Everything almost immediately goes to hell as the undead begin to bust through the door. Helen is nearly caught, yet escapes to the basement only to be murdered by her now feral daughter. If you think about it a little too hard the scene might just break your heart. The brutality and absence of humanity in the deliverance of these blows is gut-wrenching, combined with the defenseless giving in of a mother who only wants her daughter back. Romero similarly pulls on heart strings when Barbra recognizes one of the brain-eating mongrels as her own brother and frozen in fear, accepts her fate among them. Ben, now the only remaining survivor, is forced to retreat to the basement, a place he ironically had earlier claimed would be a death sentence. He is able to hold off the onslaught until morning, where a rescue team is searching the farm. In the final bit of "fuck you" by Romero, Ben lasts the genocide of this infamous night only to be mistaken for one of them and shot dead. The ultimate cherry topping on the depression cake. No one gets out of it alive. Harsh. Brilliant. 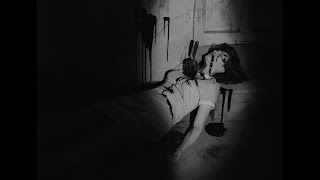 The tricky thing about complementing the director's eye for camera is that it's so inconsistent. Some of the shots ad film-making techniques will make any movie lover gasp, but some are downright awful. He too often depends on this angle that is down looking up and it's jarring to say the least. It isn't an effect that makes you feel dread or adds to the suspense, it just comes off as nauseating. Black and white might have been a practical judgement call, but it certainly works in the favor of the film by developing the tone and helps hide the relatively poor costume design of the creatures, especially in the distant wide shots. It makes the stalkers appear that much more unhinged. My only true gripe with the film on this end is that the pacing feels awkward at spaces. The argument concerning the cellar between Ben and Mr. Cooper is entirely too long and frustrating as a viewer. The momentum comes and goes in what seems to be a random manner. Otherwise, the constant building to the climax is spot on.

So, there you have it. The modern day zombie in all its grotesqueness. Later, Club Dusey will be sure to touch upon the first zombies and the latest and greatest, but it begins here. As always, thanks for reading, and keep the night light a little brighter tonight. 'Til next time. 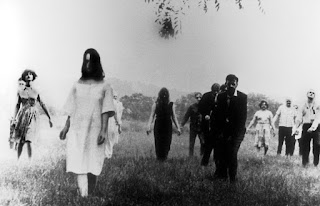