What in the John Denver is folk punk, you ask? Well, I don't really know, and you probably don't either. It's a fusion of two musical genres that never belonged together, but made it work in a way that feels oh so good. Some call it blasphemous and some call it art, so let's find out where exactly you stand. This blog post is dedicated to my girlfriend who loves that folkin' stuff, and is much too beautiful to be pictured below. Instead, enjoy this crude illustration. If that image didn't turn you off this website forever, let's discuss. Folk punk doesn't have a clear cut definition like many genres, but the general consensus seems to include punk oriented themes performed on mostly acoustic instruments commonly found in the folk genre. Simple enough, right? Turns out sarcastic lyrics paired with angry mandolin playing was just as hormone inducing as the real deal, and the scene is as strong as ever here in 2019. Let me take you back to that decade your mom peaked in attractiveness, the 1980s.

With no clear creator, folk punk instead arose with a spearheading group in both the east and the west. Violent Femmes was formed in Wisconsin 1980 and the Pogues in 1982 London, England respectively. These bands are often credited as the figures of the first movement, but their influence can be found in 70s groups such as the Velvet Underground, who also helped innovate art rock (think artists like Frank Zappa and Brian Eno).

Violent Femmes became the first such band to release a mainstream hit, the ever popular anthem "Blister in the Sun". This song, initially released in 1983, gained traction across the globe, eventually becoming the first song in the english language to be featured on RTÉ Raidió na Gaeltachta, the premier Irish language radio station. You can still hear it today across the FM waves, or in an abundance of Netflix programs. A new, slower version was released by the group in 1997 that featured the cool tone of a saxophone and the delightful hum of violins. It can be found on YouTube here. Unfortunately, this single hit seemed to be the commercial peak of the genre. While, the folk punk experiment never again set the world on fire, it remains a mainstay of culture. The Pogues, who derived their name for an Irish phrase meaning "kiss my arse" sustained similar success in their native U.K., but eventually fell after their lead vocalist was dismissed from debilitating alcoholism and the struggle to find long-term replacements. The Pogues incorporated some unique instrumentation, including the use of banjos, accordions, citterns, and tin whistles. The gang's 1987 hit, "Fairytales of New York" reached no. 1 in Ireland and no. 2 in Britain. Nothing to scoff at, laddy. 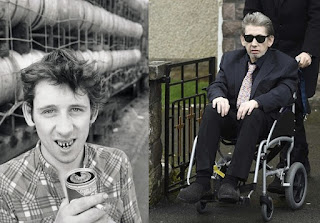 The 1980s innovators paved the way for later folk punk outfits Oysterband, The Men They Couldn't Hang, and the Levellers, all British in nature. The fusion of politically fueled art forms and acoustic settings during this time created openings for poet Attila the Stockbroker and songwriter Billy Brag.

The early 90s was mostly unkind to the marginally small niche that was now seen as a passing fad outside of the 80s acts that were still touring. However, the long arm of folk-inspired punk music was now spreading its own influence across the crust spectrum, igniting several more subgenres under the punk umbrella to take flight. Third wave ska punk was soon to be innovated, with garage/lo-fi punk and art rock/punk continuing the line of fusions within the scene. The latter half of the decade granted us a new wave of Celtic impact in the style in the form of Dropkick Murphys and Flogging Molly, who quite frankly kick ass. If you've watched any bit of American football, it's likely you've been graced by the 2005 anthem "Shipping Up to Boston". Mind-blowing moment: the lyrics were written by Woody Guthrie.

The 2000s were equally quiet, sprouting only the occasional gem, such as Andrew Jackson Jihad of Phoenix, Arizona and Johnny Hobo and the Freight Trains. The Mountain Goats finally got the recognition they deserve if you count them. John Darnielle is a wordsmith of unparalleled lyricism, and angsty enough to make it shine whether it was recorded thruogh a boombox or a studio mixing board. AJJ brought the sarcasm of punk up to the current year and slapped some stand-up bass on it to astounding results. Their t-shirt is featured on the posing model in the thumbnail, Leroy Skellinskin. I've also seen them live and involuntarily moshed (shameless humble-brag). 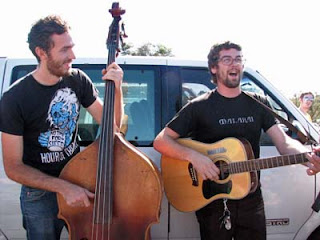 Am I biased? It's likely. the 2010s in my opinion has been the best decade for lovers of folk punk since its inception in the 80s. While I don't dare compare it to the early years, there is more availability to this sort of diversity in folk music all around. Local scenes have taken off and new faces have appeared on the record shelves. Festivals are sprouting up across the globe. Folk in general is on the upswing and with it comes the 21st century outlook on life; a little bit of bleak reality. This decade has given rise to artists like Kimya Dawson, the Front Bottoms, Ramshackle Glory, among others. Rail Yard Ghosts and Harley Poe deserve honorable mentions as well. The mish-mash of alt and folk began seeing a high rise in popularity too with charting acts like the Lumineers, Vance Joy, Hosier, Mumford & Sons, and Grouplove. Barring Pat the Bunny's denouncement of punk values and the credible sexual allegations brought on to Chris Clavin of Ghost Mice, the "fad" continues to grow. Folk revival certainly seems like its here to stay given the recent surge in counter-culture and the availability of streamable music at your fingertips, as well as other, more respectable blogs.

Pete Seeger is quoted as describing folk music as "music by the people, for the people". While not entirely an original idea, it describes the surrounding culture well and the man's own hunch for social justice, an issue just as relevant in 2019.  He must have been wise in one way or another, living to be 94 years of age. Combine this with the tenacity of a genre even more famed for the unending peril of political justice and you get this incredible tornado of strange and wonderful sounds that might even be found at your local coffee shop. Have any folk punk recommendations or questions? Drop them in comments. Club Dusey out. 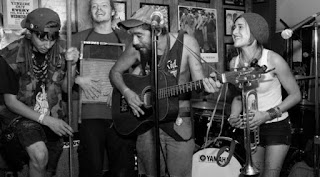