The Wolf Man is a silly movie. It doesn't take itself too seriously, it features the son of Lon Chaney waltzing around in makeup in high heeled boots and howling, and it has Bela Lugosi playing a gypsy fortuneteller named...Bela. Overall, it's a super fun Halloween flick that could still entertain you and your nephew almost 80 years later. Unabashedly captivating, here's why you'll want to steer clear of the Talbot family when the wolfs-bane blooms. 9/10, and undeniably exemplary. 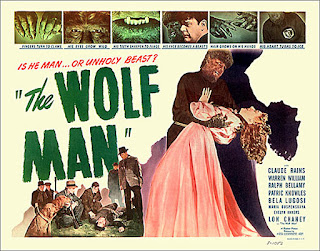 Following the shocking death of his elder brother in a hunting accident, Larry Talbot has just returned home to Wales after a lengthy sabbatical away. His family appears to be both wealthy and influential in the little town of Llanwelly, and Lawrence, a man of formidable size, brings his knowledge of tools and handiwork to his father's estate. That is of course, until a fateful night date with the beautiful and charming Ms. Conliffe, who assists in operating the antique shop across the street.

In 1941, a decade after the release of Dracula, Universal no longer seemed as concerned about creating a terrifying experience for the movie-goer so much as releasing a satisfying blockbuster. From the opening credits of this entry, you can already tell the studio had loosened up on the idea of mystery and pure horror chills and more so wonderful and fantastic tales of the strange. This is of course the direction needed to be taken, given that audience fatigue had now twice threatened the existence of their consistent horror releases. Either way, the Wolf Man once again revitalized interest in these classic character stories, and the character would go on to appear in four more cross-over sequels, including a comedy mash-up with then popular comedy act Abbot and Costello. The Wolf Man is the only original Universal monster to be portrayed by the same actor in every appearance, an accolade held uniquely by Lon Chaney Jr., who in reality was quite proud.

Junior, who was born in the old Oklahoma territory, had struggled for years to secure a leading feature role in film and was finally given the chance here, by the same studio that had employed his father in all-time silent masterpieces Phantom of the Opera (1925) and The Hunchback of Notre Dame (1923). In assigning the make-up, which is undoubtedly impressive, Chaney often endured arduous sessions of application lasting up to six hours. In awaiting the drying process, Chaney was not uncommonly sentenced to long periods with no movement allowed, sometimes lasting through lunch and bathroom breaks. Some sources disagree however as to his accommodation during these times. It seems depending on who you ask, the wolf man's make-up has become a legend of its own. 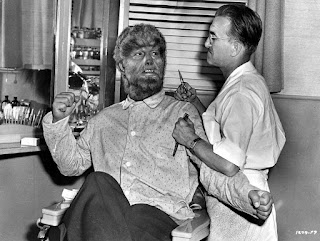 Chaney Jr. and Jack Pierce, the mastermind behind the look of the Wolf man

So we have to take a little time-out to talk about the wooing process here in the beginning of the film. In my review of Forbidden Planet, I made note of how strange it is in retrospect to see women "won" in the manner they were in retro film study. In The Wolf Man, many of these same tropes appear with even more ridiculously appearing and acceptable mannerisms. Perhaps, it's the high esteem Larry's family name is held in the village, but it is bizarre to see in 2019. Firstly, Larry discovers this dame through testing his father's telescope and the lens accidentally stumbling upon her ogling herself in her room with the windows propped open, as is commonplace. Then, Larry pays a visit to see her and openly admits to spying on her (bold move, Cotton). He purchases a staff with the emblem of a wolf on it that you may recognize from 2000's Alvin and the Chipmunks Meet the Wolfman. Don't pretend you haven't seen it too. Here he repeatedly informs her of their date later that night, which she continually persists that she never agreed to. So Larry, in all his bumbling confidence, waits for her outside the shop at closing time and insists on taking her to see a fortuneteller, which she begrudgingly agrees to. This of course concludes in her friend being murdered, the fortuneteller being murdered, and also Larry being cursed with the eternal plague of lycanthropy, and eventually his own murder. They fall in love and whatnot, despite the fact that Ms. Conliffe is engaged. Question of the week: Does misogyny and lust kill everyone important in this movie? Almost.

Moving on, Larry coincidentally runs into Gwen and her fiancé Frank at the gypsy festival, where Frank seeks to prove to Gwen he isn't jealous. (He is). Larry and Frank play a shooting rifle game, where Lawrence excels...until he is confronted with shooting a cut out of a wolf. Frank hesitates, eventually resigning from the activity and admitting defeat. Like all the early Universal horror films, the foreshadowing again is superb. The gypsy woman from earlier delivers the news to our boy that come autumn he will sporadically take on the form of the werewolf and stalk the countryside for blood. Larry is of course in denial, but accepts a token made to defend against this condition, which he promptly gives to Gwen.

From this point forward, the movie is driven from the front seat of Larry's anxiety and impending wolf-related stress. One of the key aspects of the film I truly appreciate is the victimizing of the wolf man and his trials of madness. He pleads with the doctor to give him some sort of vindication and begs to be relived of his affliction. It's refreshing to see the titular monster not just featured as the villain, but as the sympathetic main character, especially opposed to the early Universal entries. I liked the drama surrounding whether or not the spectre was all in Talbot's head. His father and the doctor are hiding their knowledge of the condition, when daddy reveals that many of the others in the Talbot lineage have seen similar circumstances. This likely explains the death of Larry's brother, though this is not confirmed. It also kind of makes Sir Talbot a bad parent.

Larry's transformation is underwhelming despite the tortuous process of special effects it took to create, even if the beast's paws are convincing. In my inconsequential opinion, the best scene in the film occurs when Larry attempts to accompany his father to church. An excellent camera shot shows the look on the faces in the church pews as they watch Larry struggle to enter. Larry does his best, and seeing his father filling the front view of the temple, relinquishes control, promptly exiting. It's a powerful final straw in Larry's transformation from man to beast. I think the effects would have aged much better if the character was presented on all fours instead of bipedally, but I understand the logistics behind it.

The third act of The Wolf Man begins with Talbot's plan to escape home and leave before he hurts someone. His love interest and father persuade him to stay. Dad plans to keep Larry in the home by strapping restraints to his body and prove to him once and for all that werewolves aren't real. Larry urges his father to take the cane along, in case. In the woods, a crew of hunters are seeking to kill the wolf man for good and rid their village of this evil. Larry of course escapes with his canine strength and immediately starts choking the shit out of Gwen, who ventured to find him. Sir Talbot uses his son's own cane to murder him, finally witnessing his son's own transformation back to a man, which probably took hours to capture by film. The credits roll immediately, with basically no conclusion. I actually laughed at how abrupt it is. The movie performed well at the box office, and Mr. Talbot was revived for a number of uninspired, but goofy sequels.

I've got to say, in comparison to the other kin of the Universal horror family, the acting is almost all spot on when compared to its contemporaries. A+ to all the leads. So, let's wrap it up. I loved this movies for reasons that separate it from similar entries, mostly because it was relaxed and goofy. The studio would continue to uphold this tone for the remainder of the 1940s with more misses than hits, but let's appreciate all the fun and meme material George Waggner gave us this time around. Love it or hate it? Tell me in the comment section. What are your personal favorite werewolf movies? 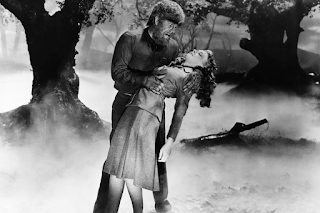