For those of you who do not know this particular Hedo in question, a flattering photo is included below. Hedo was an average basketball player in comparison to his peers, and was never particularly outspoken or perverse, so why do I feel the need to share my disdain for a random Turkish person? Find out, or forever wonder how he hurt me. 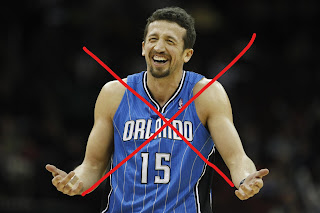 Born Hidayet Türkoğlu in his home nation's cultural and economic center at Istanbul, Hedo quickly grew to nearly seven feet in height and realized his passion for basketball. He began his professional career at the age of 17 for now renamed Turkish club Efes Pilsen. Four years later, Türkoğlu was drafted by the Sacramento Kings of the NBA with the 16th pick of the 2000 draft. With this historic selection, Hedo became the first ever Turkish player in league history. Sounds nice, right?

His breakout performances came after joining the Orlando Magic where over the course of five seasons he would place career high values in points, win the Most Improved Player Award, and become an absolute playoff monster. With perennial all-star Dwight Howard paving the way, the Magic eliminated dominating eastern teams such as the LeBron-led Cavaliers and the Boston Three Party era Celtics, before being defeated in the NBA finals by the Los Angeles Lakers.

Here's where the problems begin to seep in, but they are not why I dislike Hedo. Türkoğlu started the 2010 season in an off-season sign-and-trade deal that landed him in Toronto. After missing a game related to a stomach virus, he was suspended by the team after he was spotted partying in a nightclub soon after. Classy. Hedo then claimed he was unhappy with the organization and felt they did him dirty, requesting a trade that was soon granted. After an uneventful year, he was later traded back to the Magic and subsequently busted for testing positively with the steroid methenolone. Also pretty classy. For this find he was suspended 20 games and later waived by his team. He finished out his career quietly for L.A.'s b-team, the Clippers.

Following his retirement from playing professional basketball, Hidayet returned to his native home of Turkey and was named the effective CEO of the Turkish Basketball Federation. Here's where things get interesting, however. So for anyone out of the loop, Turkey has slowly been slipping off the edge of democratic rule since the election of current leader Recep Tayyip Erdoğan, who assumed power in 2003 as prime minister (now president). Erdoğan previously held the position of mayor in the city of Istanbul, where after reading a religious poem during a speech he was relieved of his duties, barred from holding political office, and also he was thrown in jail. Yikes. Anyways, after a failed coup attempt in 2016 led to a string of purges and jailing of opposing party members and the use of lethal force against protesters, some individuals were understandably perturbed. Enter Enes Kanter.

Enes Kanter is another turkish-born NBA star who felt compelled to speak against these actions, given he is now based in the United States. Kanter's family then disowned him, forcing him to change his last name. His father was later relieved of his career back home. The government of Turkey later cancelled his passport and labeled him a terrorist. The state is now actively seeking his arrest and aiming to try him in court, when he is not even there. The jail sentence is one that would carry a minimum of four years. Kanter cannot safely leave North America without fear of being extradited. While this is a very dire situation, it's almost like the anti-Türkoğlu in terms of national success and love in his homeland, despite their similar origins.

Okay, time to bring this full circle. Hedo, a basketball player, had been effectively named a special adviser to what is essentially a dictator in President Erdoğan. Weird enough as that is already, Kanter and him have butted heads over the comments made by Kanter in light of the situation, which Türkoğlu has taken offense to. Below is an official statement issued by Hedo, dated January 7th, 2019. Enes layer tweeted a picture of his correct and functioning travel pass. 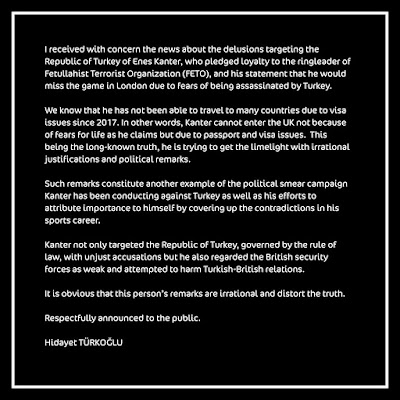 So in the span of a few years, good ol' Hedo went from being a heralded European basketball icon to an advocate for fascism. You may call this an opinion article, but I strongly encourage you to research the situation whether you choose to accept or disregard my writing. This is not so much a political statement on my behalf, bt more so trying to shed some light on an under-discussed controversy unfolding for our brothers across the sea. In my eyes, you blew it Hedo. 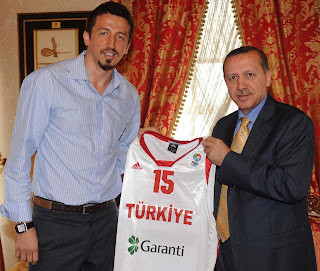