No, this movie doesn't star Brendan Fraser, but it has its merits. Like most Universal monster classics, this film is a slow-burning, heart-pounding feature of epic proportions that make the set designs of its contemporaries feel inadequate. Not interested in traveling to Egypt 3,000 years in the past or dating a disgraced and buried-alive hooligan, but maybe still want a little taste? We're scoring it here at the Club with a proper 7/10. Let me tell you just how badly Imhotep done goofed. 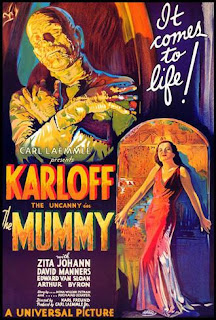 This is a film that stars Boris Karloff as an undead being resurrected to less than desirable results. Sound familiar? He's certainly less green, so i doubt you'll be terribly confused. In any case, the film opens to a warning and an explanation of the sacred abilities concerning the ancient Scroll of Thoth and the magical rites performed by Isis long ago, as well as some really Harry Potter sounding strings. A British expedition has recently uncovered the mummified corpse of Imhotep and his associated belongings, along with a chest that warns the penalty of death is imminent for any who shall uncover it. This of course results in a young and enthusiastic archaeologist ignoring both this heeding, that of his elder, and of course ignoring basic common sense. Shout-out to the portrayal of this character by Bramwell Fletcher, who nails the brief part.

One thing I must certainly credit these Carl Laemmle classics is that the introduction to the titular character is always exhilarating, with The Mummy being no exception. The unfortunate part of this entry, however, is that this scene is likely the best of the film. The first 15 minutes or so of this original is the best in my opinion by far. Not implying the film is a disaster following the ten year jump, but it's certainly a unique problem to have. I feel the beginning sets the film up as a thrilling stalker horror in the vein of the previous year's Frankenstein, but the remaining hour plays out as a typical "villain of the week" style suspense story complete with a love triangle. While I wouldn't call this movie scary, it's certainly stressful.

I praised the acting of Fletcher above, but when the mummified corpse first re-animates the reaction of his character is that of disbelief, followed by a fit of madness, complete with maniacal laughter. So my question: Is the exaggerated laughter in the face of such an event brilliant or catastrophic? It was certainly executed well enough, but is the sell too much, or would a simple scream have sufficed? If you have an opinion, tell me in the comments!

While The Mummy franchise has a long list of unrelated entries, there are no sequels related to the original, unlike the character's contemporaries. Unfortunately, the mantle was still passed around like a rag doll by both Universal Studios and Hammer Films and of course later rebooted twice and re-imagined many times over. the most prominent being The Mummy (1999) which conceptualizes the happening as an action-adventure blockbuster, to great success. It's a personal guilty pleasure of mine. "Guess who's on the wrong side of the river, Benny?". This movie itself holds a great deal of spin-offs and two sequels of its own. If you enjoy poorly-executed 2000s CGI, check out 2002's The Scorpion King. The Mummy was rebooted again as an effort to revive Universal monster classics, this time starring Tom Cruise and failing miserably. I can't explain it and I don't want to incentivize its viewing, but if you feel so compelled to discover why I am at a loss for words, check Hulu. The movie performed so poorly, it effectively killed the next five years of planned development and releases for Universal, who is still twiddling their thumbs with the next move. A Bride of Frankenstein remake is also reportedly halting development.

It's easy to understand why Karloff was cast for his voice work in 1966's iconic How the Grinch Stole Christmas! after hearing his sweet voice in his portrayal of Ardath Bey. His acting style is very basic and kind of stiff, but his lines are awesome enough to carry the character work. When Dr. Muller confronts him and determines he is in fact the mummy, he replies "Return the scroll to me or die, you know you can not harm me.." not in that order, but they are there. In fact the whole film is well written, but not particularly interesting. Frank is kind of a creepy, love-struck Shakespearean type and Zita Johann is attractive enough to cover her inadequate acting skills as Helen. The two older gentlemen look enough alike to make their conversations confusing. However, the cast is not to blame for the minor issues plaguing the movie.

The set designs and atmosphere of ancient Egypt is really impressive for 1932, and its recreation is superb. However, many viewers feel the tone of the film is derivative of cultural appropriation or a misrepresentation of its history or its people, especially its Islamic traditions. I am not qualified to dig at either side, but keep this in mind upon a second viewing if you will.

The last twenty minutes make the previous 40 worth it. The scene where Bey seeks to re-awaken Helen's memories is pure art and innovative, advancing the storytelling. With the inclusion of Imhotep's tragic demise and his control over Helen, tension builds to his ultimate goal: killing her so that her soul may be one with his ancient partner. Spoopy. I also love how reasonable he thinks he is, remarking that he is only asking for "a small moment of agony in exchange for an eternity of love". The moments leading to his pulling of the dagger are great suspense, and make for a riveting climax that ends too quickly. Isis finally becomes the G we always knew she was and saves the day. Hooray.

In conclusion, it has maybe the most going for it in terms of the early Universal monster releases, but fails to replicate the entertainment factor seen in Dracula and Frankenstein. Tune back in maybe five years to see me review the 1940s spin-offs when I've run out of horror films that aren't directed by Rob Zombie. Love you. 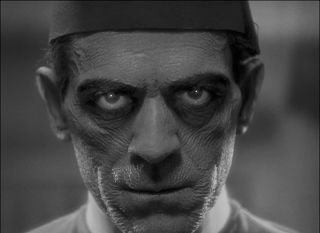