Almost as delightful as Count Chocula breakfast cereal, the famous Count Dracula of Transylvania finally emerges from the shadows and into your local theater's big screens in this 1931 depiction, starring the dreadfully charismatic Bela Lugosi. Giving birth to the Universal monsters cinematic universe that lasted well into the fifties, this classic forever holds a place in horror history, but what about our hearts? Legacy aside, it's a 7.5/10, and kind of...sensual? "I bid you...welcome." 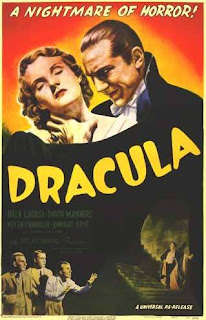 Based on the 1897 Bram Stoker novel of the same name, Dracula marks the first official adaptation to the screen after the 1922 film Nosferatu unofficially and unlawfully used the premise. The latter was subsequently destroyed, but that's a story for another time. Given the success of this film and equally lucrative stage version, head of Universal Studios Carl Laemmle Jr. obtained the rights legally and quickly went about forming a script, which is heavily borrowed from the Broadway show as opposed to the source material. After its great commercial triumph, Universal continued to release similar classic movies to acclaim for the next 25 years. Dracula, despite its many shortcomings established the talkie horror as a viable medium and marks the birth of modern horror cinema. No biggie.

Casting and production went through a series of jumps before finding its footing. Bela Lugosi, who had been enjoying a successful run as the titular character in the realm of theatre, was not initially sought after by the producers. At least seven other actors were considered for the role, but chance struck when a show took place near the studio and his performance won them over. Another factor was likely the fact that Lugosi was willing to work for $500 dollars a week. The film sets a number of cast members and key behind-the-scenes who would continue to work in Unversal horror for some time, including Dwight Frye, David Manners, and Edward Van Sloan. A Spanish language version was filmed using the same sets and costumes, with different actors and crew working at night on a tightened schedule. This version starring Carlos Villarías has also been acclaimed and deemed significant. It's likely Club Dusey will make its way to a crappy review of this film also, so keep a look out. The film was produced as directed by Tod Browning, although its pretty universally agreed that Karl Freund ghost-directed the film. You may recognize him as the principal cinematographer of I Love Lucy, or the inventor of the unchained camera. Onto the movie.

Dracula opens to a carriage ride occupied by a man named Renfield on his way to meet the famous Count Dracula at his castle in Transylvania to discuss the signing of a lease. Scared yet? On his way, he makes a quick stop with the natives who warn him that staying out during the night time was an absolute fuckin' no-go. Renfield in turn mentions the name of the count, and a nearby Hungarian woman does the sign of the cross. It's the perfect set-up with such a small detail. Renfield of course goes anyways because he's a big idiot. At one point the driver of the carriage is led by a bat. It looks like it was bought at a Dollar General and its hilarious, but I'll allow it.


Dracula is an awesome enough of a host that it would make all my friend's moms jealous, even offering wine and a bed. Bela's accentuation and mannerisms became the iconic look for the character. He also looks pretty good for being near fifty years old. At one point, howls can be heard and Dracula only encourages Renfield to share their enthusiasm for the night. When time comes for deals to be done, Renfield cuts himself and blood is spilled. It's the first official "Oh Shit" moment of the film, when Dracula's eyes light up, but he is quickly warded away by the showing of a cross. One of my favorite aspects of Bela's portrayal is his weird hissing and overblown whips of the cape to shield his eyes. It's comical, but entertaining and illustrative. A few short moments later, Renfield is surrounded by some vampire babes and made into Dracula's insane slave who carries out his will and also eats spiders now for whatever reason. Renfield's demise is the ultimate tragedy of the story, given his life exists only through his master, the sanitarium, and eventually death. The idea of losing control over one's mind is particularly fearsome to me. The ending sequence involving the leading of Mina down the stairs bare an eerie resemblence to that in White Zombie, an independently produced film also starring Lugosi and released the following year.

One of the biggest flaws to this iteration of the story is that all the characters beside Dracula and Renfield are flat, used for nothing except to advance the story. Even Van Helsing, who seems to make stuff up as he goes along, is boring to listen to. I also watched Van Helsing (2004) one time too many, so please forgive me. I'd also argue that most of the parts that were clearly intended to strike fear into the audience are poorly executed. Almost every death or supernatural event is done off-screen. However, the movie does a good job at making the most of these moments and building proper suspense. Dracula's death isn't even shown or heard, which is immensely disappointing. Also a note, just because Dracula looks like John Travolta doesn't mean we need a five second close-up every few minutes. I get that maybe the audience was mildly xenophobic or something, but Bela is kind of handsome, and not at all a man who would make me scream if  had to look at him in a movie. Contemporary newspapers reported that movie-goers were actually fainting during the film it was so scary, which is awesome, but probably hyperbole. Either way, these rumors only increased its ticket sales. One of the troubles of Dracula is that it holds on too tightly to the conventions of silent movies to continue the narrative as opposed to innovating sound techniques. In most places this is a drawback, but the minimalist soundtrack does up the spookiness factor. The movie has an awkward tone, but one of the reasons I really like it is that it checks all the right cheesiness boxes. A big part of this is Bela's timing and manner, second only to those of Leslie Nielsen's late comedy roles. I only wish he could have played the part in some quality sequels, akin to his frat brother Boris Karloff/Frankenstein.

Before we sign off, it's important to remember how influential this movie was not just for the reasons mentioned above, but because it basically invented the way Dracula and other vampires look, behave, and sound, or at least had a much bigger impact than any other source. The movie is not as good as most of the other monster classics of the time, but Dracula is easily the coolest of the villains. In a deleted final scene, a narrator remarks, "Just pull yourself together, and remember after all, there are such things as vampires!". Goodnight all, see you next time. 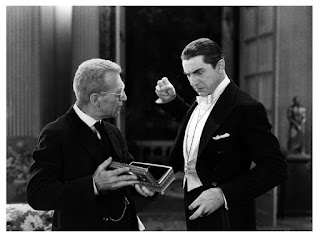