Why Red Shirt Shaggy is the Most Powerful Shaggy

If you've seen any bit of 1980s Scooby-Doo, you should get a free ticket to heaven for sure, but even if you haven't, you've likely been exposed to red shirt Shaggy. Even though he wore this shade for most of the decade, it's still kind of jarring today as a viewer and feels kind of gross. So why did it happen? No one really knows! Let's talk about it. 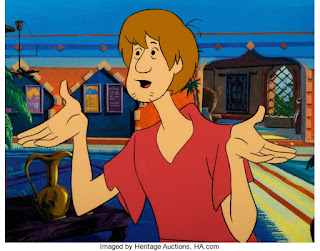 Red shirt Shaggy first appeared in 1985's "13 Ghosts of Scooby Doo", which kind of changed everything about Scooby Doo. The main cast features Scooby, Scrappy, Shaggy, Daphne, and a Latino boy named Flim Flam, which you just kind of have to accept. Fred and Velma are mysteriously missing and Daphne has some really groovy 80s hair a-flowin'. Its likely Shaggy's shirt came about because of the other new artistic choices, but there's a rumor that red ink was simply cheaper than green to use. 13 Ghosts is also unique in that it features real ghosts and a scary demon box filled of spirits. The mystery machine was also an airplane. I'm serious. It was terrible, but it was also really psychedelic. 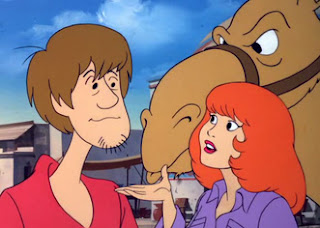 Lastly, in the ridiculous department of characters is a warlock friend of Flim Flam's named Vincent Van Ghoul, who is voiced by Vincent Price and shares his resemblance. His phone is presumably non-functioning or too mainstream, because Vincent likes to pop in via crystal ball. Sounds like a refreshing entry in the series right? It was cancelled before its final episode premiered, and is only now being concluded by a movie featuring an adult Flim Flam 34 years later. Also there's a werewolf cult. But enough about this show, however hilarious it was.

Shaggy subsequently appeared in red in the following films: Scooby-Doo Meets the Boo Brothers (1987), Scooby-Doo and the Ghoul School (1988), and finally Scooby-Doo and the Reluctant Werewolf, also produced in 1988. These films may trigger some childhood nostalgia in some, as well as memories of sick days spent at home watching Boomerang on the weekdays. There were no more home movies for the gang until 1998, when Warner Bros. began producing one a year and Shaggy Rogers had long returned to green-clad shirts in re-runs and commercials. This cycle concluded with 2001's Scooby-Doo and the Cyber Chase. What's interesting about this film is that the alternate reality version of the gang that appears within the story features Shaggy in...you guessed it, a red shirt. Is this a simple easter egg, or is it representative of red-shirt Shaggy as some strange otherworldly Scooby-Doo reality. Perhaps, Warner Bros. wanted to retcon these late 80s depictions of the characters as non-canon entries. Or more likely, it was a fun thing for the fans to see. In either scenario, its the last real reference to this time period that is so iconic now. So just like that, red-shirt Shaggy comes and goes without an explanation, leaving fans wondering about the change over 30 years later.

So in conclusion, while I hope this entry was not completely useless, there is not much to really draw upon without more details or information. The most common explanations include that the creative forces simply wanted to update the character with the 80s, but then why revert back to the original design with no explanation? To cash in on nostalgia? Probably. Search the web, you'll see mainly posts asking this question with the same answers I provided here or none at all. So instead, what are your favorite memories of red-shirt Shaggy? Have any theories? Thanks for reading anyway, friend.
At least this article isn't about Scrappy, right? 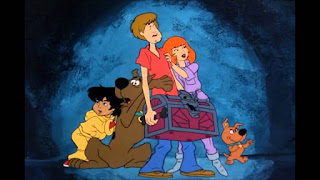