The Epic Dumpster Fire that is Fallout 76

Long-time fans of the Fallout franchise have come to expect a lengthy, single player experience filled with detail and world-building that places the player in complete control of their journey through the wasteland. So what did Bethesda pull their resources for? An online only co-op title. This in itself isn't disingenuous, in fact it was certainly creative. The issue is that the game is a buggy, unsatisfying release with a hilarious chronology of marketing and development failures. Let's crawl out through the fallout, baby. 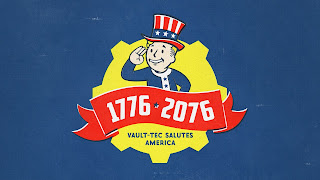 Fallout 76 has some pretty nit-picky criticisms like unfinished features and bugs that are common even in some of Bethesda's all-time classics such as Elder Scrolls V: Skyrim. Other criticisms include the lack of a clear objective and the absence of non-playable characters, but the gameplay is promising and some of the online interactions are genuinely interesting, like stumbling upon a hidden cabin with a new acquaintance. I imagine this was the aim with an online exclusive title, but if you encounter any player at all, you're more likely to overhear whatever hip hop song they are blaring or an argument with the player's wife. Nonetheless, it's a new direction and the concept was neat, if not poorly executed. The world-building itself is impressive, and post-apocalyptic West Virginia is stunning. According to website West Virginia Explorer (https://wvexplorer.com) ,the game has actually directly led to an increase in tourism up to 15x since the release announcement.

So here comes the actual issues, of which there are plenty. Some glaring mishaps became apparent with the beta version of the game becoming available to pre-order players, such as glitches in character creation screens and microphone malfunctions. While Bethesda addressed these concerns, they remained largely unfixed in what Forbes magazine described as "a historically bad launch". With game-breaking glitches and a $60 price tag, there was a pretty sound backlash which led to organized boycotts and online petitions abound. In fact, one month later the price is already down to $39.99. Ouch. The game has seen a successful patch and many game-breaking glitches have been altered, but the fanbase is still up in arms given the numerous complaints unrelated to gameplay, which is again exhaustive, for sure. In fact, as I am typing this up right now I see a headline that arrived this morning that confirmed Bethesda fixed a widescreen issue by falsely stretching standard resolution to meet UltraWide screens instead of recreating the actual dimensions. Pretty funny, especially if you consider the longer this game is out the more problems that will be unearthed.

This one is my favorite. Bethesda marketed a special Power Armor edition of the game that comes with some special goodies including a map, figurines, a helmet, and other related merchandise for the crispy price of $200. The fans were promised a decorated bag made of canvas, but once they reached the buyer it was found to be a nylon duffle bag. Yes, this is hilarious, but it isn't the best part. A disappointed fan contacted a representative to address the issue and the rep told him in confidence, that they know and aren't planning on amending it. As a bystander, it's really goddamn funny. Here is a copy of a screenshot, the readability of which I am not sure. 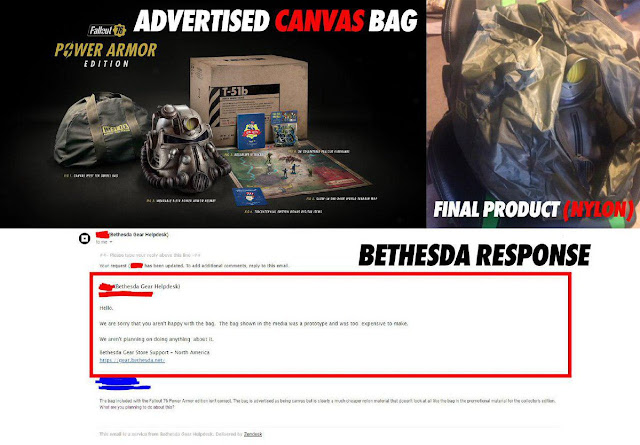 Bethesda later released a statement declaring the media respondent was an intern and they were sorry. They also gave out a code for a $5 to the creation club in an effort to repay the fans. Yep, five whole dollars. Then, it was leaked that popular influencers such as reviewers and media outlets had in fact recieved the advertised bags that player did not, which only furthered this big shitfest of PR incompetence. However, the website has since been updated to reflect that the bag is now nylon following the controversy, which as we know makes everything better.

The final icing on the cake now being that a recent glitch publicly displayed everyone's personal IDs in an accidental doxxing, including credit card numbers and other information you may not want JimBob across the country to see. I'm curious to see how this is handled, given that it still ongoing. So maybe as time goes there will be more to report, but for now keep on raging fellas. If you didn't buy the game, just sit back and enjoy. Remember, the game was only released a month ago.
By Louis Stevens at 12 December
Email ThisBlogThis!Share to TwitterShare to FacebookShare to Pinterest
Labels: Gaming
Newer Post Older Post Home