Sometimes you might sit back and think, "Man, I sure wish there were more killer clown movies." Well, probably not, but this movie might just be worth a watch if you're looking for a more intimate and indie-feeling scare with some Hostel vibes that keep your body curled and twisted in fright. Did I like the movie? Actually, not at all. Was I glued to the screen? Yes. Did I feel like I needed to call my mom and tell her I love her after I watched it? Also yes. The movie is pretty freaky and over the top gut-twistingly gross. I'm giving it a 5.5 out of 10, because I'm a huge baby. Let's continue, shall we? 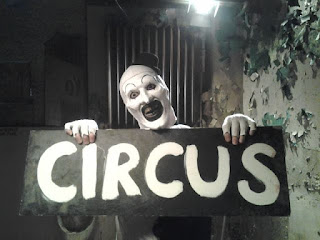 One of the most unfortunate aspects surrounding the release of this Netflix hit is that it became available for streaming shortly following the DVD release of Stephen King's IT (2017) which kind of makes this movie look like shit. However, there are some really interesting ideas explored in this film and the directorial work is terror-ific. The main theme of the quality of the film could be summated as a talented director milking the best of what is above all an unoriginal slasher narrative.

This is the first review I've made for a spooky film with a sort of body horror that made me feel legitimately sick. I've seen Evil Dead more times than I'm probably willing to admit, but I was never grossed out to the extent I was viewing this film. Things this movie taught me: Eye-gouging is an absolute fuckin' no-go. Not for me, brother. However, it was certainly effective in targeting my emotions and in this way it was effective. However, I felt the movie relied to heavily on the violence factor to cover for its storytelling blunders. In fact, they show a woman's vagina cut in half. It wasn't great. I also recently saw a movie called The Green Inferno, a graphic cannibal picture directed by Eli Roth that I hated so much I couldn't review it. Anyway, one conflicting aspect of this movie is that I mentioned I thought it was dull, but I couldn't take my eyes off the screen. When this movie tries to draw suspense, it's fantastic. One of the best horror flicks I've seen at building suspense in the last few years.

This film's primary antagonist is a jolly little fellow named Art the Clown, who previously appeared in short films titled The 9th Circle and All Hallows' Eve. Marking his third appearance, the question still lingers, who is he? Why is he? One of the most frustrating facets of viewing these works is that Art is clearly pushed to be an iconic character in the genre, with virtually no world-building. Art is a murderous clown, sure, but after a given length of time it insults the audience to relentlessly feature a character with no story, origin, or motivation. Okay, slow down, some of the most iconic horror characters are unexplained, right? True, but there is always a fleshed out aspect of the character that leads the audience to some logical conclusion. Especially if you only take this film into context, you're entire context is this clown who previously murdered a group of folks and is now rumored to have returned. So far, so good. Now he lives in a basement and murders people while acting like a mime. This act is only compelling for so long before it simmers into monotonous kills with little inspiration. It sounds ridiculous, but if Michael Myers just waltzed around without his connection to Laurie Strode, we'd say it was stupid. I'm not condemning the character, but if he is to be featured continuously, his edges need defined. You learn a little about the character as the plot progresses, but these idiosyncrasies seem inconsistent and unrelated. I'm still rooting for you, Art.

My other largest criticism of the film is all the loose ends that are left astray. Vicky, the disfigured woman featured at the beginning and lone survivor of Art's attack, becomes some sort of gruesome murderer following her interview. What? Give me your interpretations in the comments if you have any, because I am clueless given what we know of her character. What the hell is with the cat lady? Maybe I am missing something, but I don't understand the inclusion of her character at all. Even so, the execution of her personality is poor. As mentioned earlier, the narrative is a mess for sure. I did think it was interesting to kill off the primary protagonist halfway through the film. I wouldn't call it a twist, but it definitely led you to assess what just unfolded.

I'm actually very interested in the future of Art's character and intrigued by the prospect of a sequel. I feel Netflix could benefit from more original horror content, but this one was a miss in my book. Either way, director Damien Leone is one to keep an eye on and maybe will see Art again in a future Spook-Light. Do you want to see more killer clown reviews? Let me know! 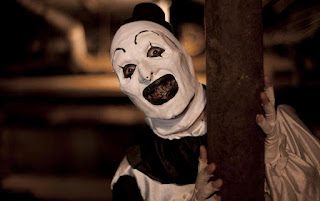