The chilling conclusion to the Boris Karloff trilogy of monster mayhem filled releases marks the end of established continuity and the beginning of well, a never-ending list of sequels equally strange and far away from Mary Shelley's original vision. That poor woman. Anyway, there's much to discuss if your interest may be piqued by the likes of one-armed inspectors, a tooting horn that summons murderous desires, or seeing massive amounts of talent go to waste on a silly cash grab. Who knows, this could be the disappointment you need in your life. Joking aside, it's entertaining enough for a movie that's 80 years old and I'd be honored to give it a score on the Dusey-Meter of 6.0. It's exhausting at this point, but...IT'S ALIVE! 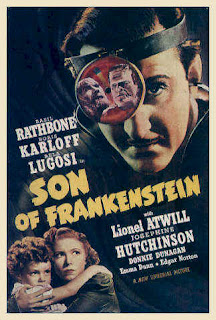 This movie has a lot going for it, and those elements almost single-handedly revived interest in Universal Pictures monster phase, but the execution is poor to say the least. This film also proved to studio heads that inserting a character with as much drawing power was almost guaranteed to sell some tickets, launching a new era of constant releases featuring the likes of Dracula, the Wolf Man, and "Frankenstein" himself. It certainly seemed like a necessary entry to view for me, being touted as the monumental release it was, so here's my thoughts.

In this sequel, director James Whale is out in favor of Rowland V. Lee, an experienced director known primarily for dramas and hailing from Findlay, Ohio. Whale had since moved on to other genres and did not express interest in returning to the series, given the finality of Bride of Frankenstein. Basil Rathbone now takes the lead role of the film, portraying the titular character. Rathbone is certainly an upgrade over Colin Clive in terms of charm and ability, but he is almost too perfect for the expectations set on by the character. He's handsome, diplomatic, and charismatic as opposed to his on-screen father. I mean, he even has a name reminiscent of a superhero. It creates an interesting dynamic for sure. Rathbone would later go on to play Sherlock Holmes in a total of fourteen films in a seven year span., a role he is still mostly associated with. One of the strengths of this film over its predecessors is the sheer amount of star power involved. In the past two years, Universal had mostly abandoned the horror genre in its yearly schedule, putting Karloff and Lugosi in a desperate search for work, and jumping at lead roles here.

Bela Lugosi's role as Ygor, an old fool who had once been hanged and now seeks revenge upon those responsible, is absurd to say the least. It's entertaining as hell, but presumably for all the wrong reasons. At this point, Lugosi had already starred in a number of respectable horror entries and received less recognition on posters and promotions than his co-stars, likely because he had been typecast as "evil Hungarian man". In regards to Ygor, I'm mostly curious as to how much of his portrayal was influenced by the vision of the director or Bela's own instinct. I'm only asking because Ygor's mannerisms are so unique and extreme. He looked dirty, He spoke in his strange raspy voice I haven't heard before or since, walked like he was a participant in a three-legged race, and is just overall goofy. I want to know who dreamed this up on some sunny day. Seems he only used about half of his mouth and it sounds as if Simple Jack had grown up in a coal mine. Either way, the character is sinister and intriguing enough to keep one interested, even if little explanation for his bond with the monster is explained. Lugosi would return to the role in 1942's Ghost of Frankenstein. 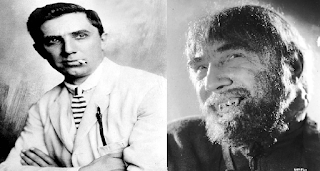 Pictured left is Bela Lugosi, right is Lugosi as "Ygor"

The monster is a different beast altogether. The character has regressed back to a bumbling, uncohesive force of nature with little reasoning to bare. This was explained away as the monster being damaged previously and now suffering from some brain damage or amnesia, which you just kind of have to accept. For the purpose of the narrative, Ygor has been maintaining and caring for the monster. This relationship eventually progresses to a point where the monster can be summoned by a horn of sorts that Ygor uses to make the monster carry out his murderous bindings. When Ygor is destroyed, the monster mourns him and seeks to take it out on little old Frankenstein. Per my own trusty time-keeping, the monster does not appear on screen until the 45 min. mark, not being fully conscious until the 55 min. mark. Understandable, but severely disappointing after the character took the starring role the last go around. The new karate chop finishing move is pretty tight though and easy to replicate on your friends. I wish they would have expanded upon the parallel drawn by Ygor when he remarks that the monster and Frankenstein are practically brothers. With proper execution, it could have brought much needed gravity to the great climactic exiting of the picture.

This entry suffers the most from unnecessary exposition and straight-up unfulfilling interactions. The redeeming aspect of the film is it's huge moments that blow your spooky socks off, but they are few and far between. The grand reveal of the monster's body is excellent, as is the conclusion of the Benson's missing whereabouts. But to enjoy these moments you have to slog through the first half hour, which is honestly pretty tough. The movie also seems like it keeps building and building, and then they blow their load in an ending that lasts maybe ten minutes max. The last sequence involves the monster taking Frankenstein's son and teasing a sequence of despicable acts towards him, but it never goes anywhere. There is a three second shot of the boy being suspended above a burning sulfur pit and then helped on a ladder. What? I wish we'd known his true intentions, but we can only assume the worst. The climax of the film is the scientist swinging from a rope and kicking the monster to his timely demise. It would have been cool, but it comes out of nowhere and no suspense is really built to make an impact. Oh well.

The highlights of this movie are the cinematography, which is the best it's been by far. The use of light and staging is fantastic, and the soundtrack is superb in bringing a sub-par story to life. I mentioned the strength of the actors above as well. All these elements collide to almost save what is an underwhelming story, but fail to deliver in full. Many contemporary critics were satisfied to call it a fitting ending to the narrative begun in 1931, whereas I disagree. This is to say it shant be skipped when detailing the story and its impact, but it doesn't quite do our big green friend a huge solid in terms of quality either. Thanks for reading, and remember to always check your closet for 8-foot tall behemoths. 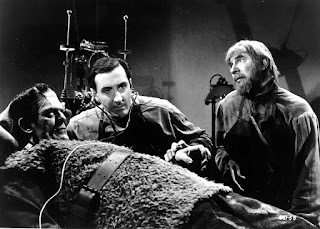