In my review of Forbidden Planet, I declared that Robby the Robot was the definitive icon of science fiction media, so in this review I'd like to make the same claim for Frankenstein's monster in the horror genre. Appearing in at least fifty-five theatrical releases following the debut of James Whale's adaptation, the monster is horror incarnate. This is the film that strapped a rocket to Mary Shelley's 1818 novel of the same name and I'm making a goal to do this character and Universal Studios' production some proper justice through an inciteful spook-light. The movie is an easy 8.5 out of 10, the legacy an easier 10 out of 10. It's Alive! 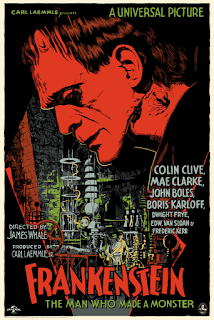 The alternative title for Shelley's novel still reads as The Modern Prometheus, a work that was first impressively published by a woman of only 20 years of age. An interesting note because of standards of the time, it was initially published anonymously. Mary spent a good deal of time traveling in Germany, at one point mere miles from a historical site bearing the name Frankenstein Castle, formerly home to a 17th century alchemical enthusiast. Some interesting dreams and discussions with the famous Lord Byron, the mad scientist and his creation were born, becoming a literal sensation. Ripe with biblical allegories and featuring an 8 ft tall re-animated man with the sensibilities of a child, the release was met with mixed reviews but culturally rocked the market. Theatrical productions soon were formed and sold well. The creature remained relevant enough to warrant a film adaptation over a hundred years later and subsequently as popular another eighty-eight years later.

Traditionally depicted as a massive man with green or gray skin, scars, and plain face, Frankenstein's monster has lately seen more humanistic portrayals in Penny Dreadful and I, Frankenstein. However, it is still difficult not to call Boris Karloff the default look of the monster, down right to its distinct mannerisms and facial expressions. While the novel provided the blueprint, the movie created the render. In terms of effectiveness, its hard to say that Karloff was not key to the success of the character. Bela Lugosi, Dracula star and ultimate Hungarian monster hero, was initially cast as the lead and subsequently left after seeing the original plans for the script and character direction. He later portrayed the monster in the twilight of his career, Frankenstein Meets the Wolf Man (1943). 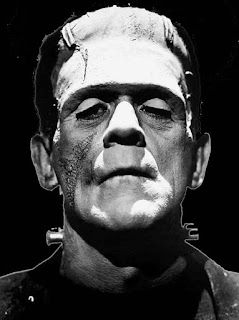 The film opens with a cautious, but excited monologue addressed to an audience that serves a warning that the following will be extraordinary. While setting the tone, you can begin to sense the style of the writing. The opening credits list the monster as being played by "?" as opposed to an actor. It's unique and acts to uphold your willing suspense of disbelief. Here I must take a moment to praise Colin Clive, who played a mad scientist type almost too accurately. You could feel the exhaustion in his words and the passion he felt to recreate the Lazarus incident. He even looked the part. One of the key strengths of this film is the confidence it holds in it's own simplicity. The movie is base, but effective because the integral points are strong.

The weirdest thing about this movie that I really didn't expect is that the monster is actually scary as shit. He moves quickly from a stalled stalking movement to a hasty grab of the throat. The kills in general are kind of very explicit for a film released in 1931. I almost see Frankenstein's tragedy as a predecessor to the slasher genre, and I imagine many a director agree. The suspense in this film is built up perfectly and reflects the style of the creature himself, from slow-moving to instant death, reminiscent of later icons like Michael Myers and Jason Voorhees. Interesting to see the similarities to the Rocky Horror Picture Show, especially the interactions between the monster and Fritz to Rocky and Riff Raff respectively. Unfortunately for Rocky, he was a singing bodybuilder and not a fucking giant killing machine. The monster is unique in his emotional episodes and innocence despite his actions. His interactions with Maria are surprisingly wholesome, bringing a smile to my face. You know...until he murders her too.

The only real complaints I hold is that the characters act in a way that is opposite of typical interaction and more representative of the stage. However, I understand that this was par for the course. The third act feels rushed and hastily concluded. The character is so interesting it leaves you wondering if he still could be rehabilitated. The final scene is mostly unsatisfying, given that it only shows the mill burn from afar as the credits roll. My final complaint is that I streamed this movie on a site that made my eyes bleed with constant wedding ring advertisements. At least the music was catchy.

I'd love to do a character spotlight on the monster if this post gains enough traction, so let me hear your interest! There are many deeper aspects to the character in regards to emotional, ethics, extended metaphors, and differences in portrayals through the century. Otherwise, remember if you're in doubt, try killing it with fire. See you all for Bride of Frankenstein (1935). 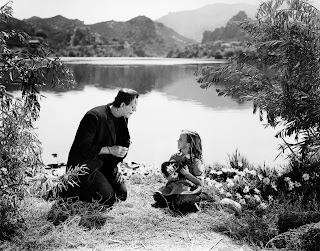