The Dark Knight. The Empire Strikes. Speed 2. Wrath of Khan. All of these sequels except one is better than the original. Today we're taking on a classic film that surpasses its predecessor in almost every respect, even in the cheesiness of its title. An absolute horror classic and a movie that just makes singing the Monster Mash even more fun. Here is a chilling tale of madness, The Bride of Frankenstein. I'd give it a Boris Karloff out of 10, but more appropriately a 9 at least. 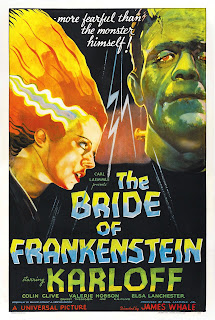 This movie is incredibly different than its predecessor and all for the better. The titular monster is fleshed out and emoted, the pace is stronger, and the storytelling is more engaging. As the story goes, James Whale was not expecting the final product to be inherently successful or marveled so his goal became to at least "make it memorable". This is the true strength of the movie. It never stops or dwells on the nature of cinema or its previous entry, rather comfortably pushing far away from it.

The introduction itself in my opinion was brilliant, even if it a tad-bit meta. I thought the framing of the story compelled its fantastical elements into a fine tale, changing the expectations of the viewer. Shelley acknowledges the moral warning broadcasted in her previous tale, that man should not attempt to emulate god. The movie has many subtle references to christian symbols if one is willing to look. In addition, casting Elsa Lanchester as both Mary Shelley and the bride was brilliant, even if the credits did not reflect this. Her name is listed as "?" much in the way the monster is in Frankenstein. Boris is simply credited as "Karloff". Colin Clive returns, whereas Mae Clark does not. Mae had been suffering from illness and Clive managed to overcome his alcoholism in order to perform. Dwight Frye, who portrayed Fritz last time now assumes a small new role. My only real complaint in terms of casting is that Minnie is pretty over-the-top and annoying, though perhaps this was the intention. 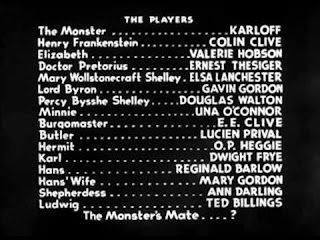 In this film, the monster finally assumes the role of the main character and the movie is more entertaining because of it. His exploits are fun to see unfold and his mannerisms change accordingly. In the beginning, the writers remind the audience that despite his aggressive behavior, his mental capacity is comparable to that of a curious child. The scene where he befriends the blind woodsman has become one of my favorite of the black-and-white era. It brings a smile to be to see such a tortured existence be shared with another misfit, if even for a moment. One of the more controversial aspects of the character is his acquisition of speech and the speed at which he acquired it. I would agree, but it makes the ending quite worth it. The scene where the monster meets Dr. Pretorius is straight up hilarious to me for a number of reasons. One because the doctor is just such a cartoon-like maniac, but also because of the monster's new appreciation for intellectualism. This dude was murdering children like a day ago and now he engages in some deep conversation about his needs to a mad scientist? It's absurd for sure, but it's also wildly engaging. I also really appreciate that the monster has turned into some fiend who can be manipulated through his love of cigars and alcohol. In general, humanizing the beast brought this sequel to the next level, even if Boris Karloff adamantly rejected the concept. Another benefit to the monster taking the spotlight is the subtraction of the needless family drama that plagued parts of its predecessor. Frankenstein sometimes got too caught up in the apprehension of whether there was to be a wedding, really horrific stuff for sure.

The ending is mind-blowing. The titular character never speaks a word, but her rejection of the groom is not entirely surprising. The monster's realization that she hated him, much like everyone else is however quite shocking. All he wanted was a friend. The monster then lashes out and decides the ultimate fate of him and his wife-to-be. "We belong dead," he proclaims and ensures that they soon return to this state by pulling the lever and crushing the laboratory to bits. While this is introspective and quite enthralling in and of itself, the creature's decision to spare his creator but not Pretorius is puzzling. Perhaps the brute understood that Frankenstein had the loving connection with a woman he never could. Maybe he showed mercy to his architect father. Either way, the conclusion is what brings this movie from a fun movie, to a cinematic necessity for fans of horror. The storytelling is superb, even if you have to accept some impossible assumptions. Should I review more Frankenstein or put the man to rest? Tell me below. She's Alive! 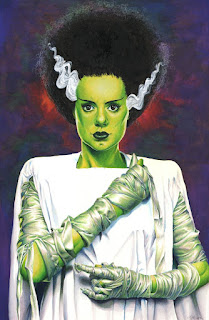