Man, oh, man, The Void. A tale of Lovecraftian concoctions and outer-worldly dread that you thought you could only experience via a hallucinogenic accident. Short on time, but you still found your way to my blog? Here's a short cut: It's a pretty fucked up movie. 7/10. I know this introduction comes off more as an advertisement than a warning, assuming you're either a horror fan or a masochist, but this film really is an experience that requires a number of things: a strong heart/stomach/genitalia, a focused viewing, and an understanding that you will not feel relieved or satisfied at its conclusion. 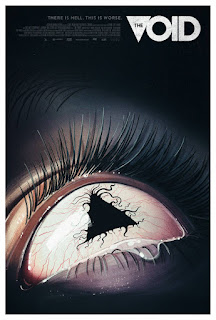 There exists a troublesome phenomena in cinema where once in a blue moon a film's underwhelming budgetary confines work to the advantage of the producers and creates something truly special in the realm of "tell, not show" (see John Carpenter's Halloween or David Lynch's Eraserhead). I was never a fan of "found footage" styled flicks outside of  The Blair Witch Project (1999), so I have omitted these for consideration, but kudos to films such as 2009's Paranormal Activity for consistently churning out such high profits at the box office on limited budgets. The Void is unique in that the making of the movie was made possible almost entirely through crowdfunding efforts that managed to yield a whopping $82,510 and puts together a movie that utilizes this moolah very effectively. While most of the film's contents are shrouded in mystery intentionally, perhaps due to the nature of this predicament, I bring up this point to bring attention to the practical effects employed in the picture. The design of the horrific creatures that were unfortunately "created" and confront the rescue team in the dark basement of the hospitable is memorable and chilling. Synthetic blood and all, the likeness of these monsters brings one back to the horror effects of the 1980s and maybe your equally horrific fashion sense of the time. Anyone remember Freddy's Nightmares?

The minimalist approach to film-making is executed in model fashion through the depiction of the robotic-like cult that surrounds the events of the the Void and cinematography is a central aspect that adds to the appeal of their demonic intentions. The shot of the sirens blaring and shining into the face of evil they embody is nothing short of brilliant. I particularly liked the shot of the blue triangle door warning the team of the cult's omni-prescence as well. The symbolism is a facet that just may be overlooked, but it is another key to stretching the most out of this film as possible and shapes the doom-filled atmosphere into one that leaves you with loss until you fall asleep. This movie is loaded with astonishing potential, so naturally it comes time to bring the gripes. The writing is satisfactory enough for an indie film, but fails the movie in some unfortunate regards. The cult-leader twist is underwhelming and provides no real motivation to care for the betrayal. The characters are bland and unoriginal stereotypes of horror cinema, despite the worthy performance of its cast. It may seem contradictory as an avid consumer of H.P. Lovecraft - inspired media to dislike the conclusion, but I thought the summation of the climax was weak. The last shot of the film is neat, but the ritual left much to desire as a fan.

I praised the practical effects above, but the more grotesque makings of the film are sure to be divisive among viewers. While I'm sure many will agree that Beverly's reveal is nothing short of awesome, later experiments may prove lame or unnecessary dependent on taste. Isn't that the beauty of subjectivity? 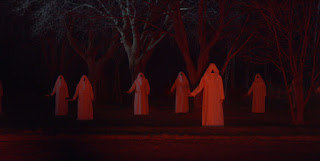