Whether this movie is a Halloween tradition you revisit with glee or a direct-to-DVD cult film you've never heard of, Trick 'r Treat is one of the few films of the 21st century to truly capture the goofy, sometimes horrid representations of the holiday. Some may be quick to link up the film with director/writer Michael Dougherty's later venture Krampus, another film with a dedicated minority of fans which unlike Trick 'r Treat, became the butt of jokes for the last two months of 2015. Is this review too long for you? Here you are: I'm giving the film a 9/10, assuming you like creative storytelling and intimate horror comedy. 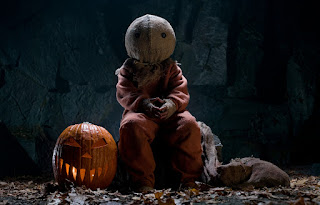 The film is presented in an anthology format detailing four tales of revenge, comeuppance, and the classic virtue of "never judge a book by its cover". These grounded, small-scale stories of haunting take place in the perfectly dreary fictional town of Warren Valley, Ohio. A resident of north-east Ohio myself, I have to admit the film's suburban depiction is fairly accurate to life here in the area, complete with the general sarcasm the characters exude from time to time. However, these happenings may seem confined to reality in accuracy to realistic characters and setting alone, as the mythos of Halloween is clearly and explicitly manifested in Sam, a hooded trick-r-treater who enforces tradition with strict expectations and gazes upon the holiday's tolling with acceptance. Sam is not one of the most iconic horror figures, but the use of his character as a "necessary evil" is entertaining and his presence is not overdone (see the eventual fates of Michael Myers and Jason Voorhees). He is an excellent tool to bind these incidents together and represent the spirit of trick-r-treating in the form of a costumed judge, jury, and executioner.

As you may have guessed,  I consider writing to be the strong point of the film. Quality storytelling is mostly absent from large theatrical horror releases (my opinion of course) and it was refreshing to view this movie and follow the character's journeys. If you are a fan of horror and appreciate the same sort of expectations in cinema, check out Blumhouse Productions and Netflix Originals. Both still have their faults, but are providing a step in the right direction and at least you won't be spending your money on Saw 25 or The Purge: Another Sequel. I really dug the tone of this movie, brilliantly weaving in and out of comedy moments and horrific reality, akin to Tales from the Crypt (1989-1996). The scene with Mr. Wilkins and his impatient son is downright hilarious. I will admit however, the opening scene fell flat for me and I wish there were a more fitting introduction. I have to say the plot concerning Laurie and her sister Danielle is my favorite and stands as an example of how to do a twist without making the audience groan. The cinematography was also a highlight and a standout in making the film capture the fun of Halloween festivities. There are several shots where the lighting and angles say much more for the shift in tone than words do. You can notice characters in the other stories strolling about in the background of the others upon second-viewing, so the film comes with decent prospects of replay-ability.

Overall, this movie stands tall as one of my favorite horror movies I've seen this year (2018), along with The Void (2017) and Pumpkinhead (1988). And if you've seen Pumpkinhead and thought, "man this guy likes Pumpkinhead? Really?" then that's just fine and dandy. Tell me which horror movies you like in the comments, or why Pumpkinhead is so terrible your dog wouldn't finish it with you. Thanks for reading, as always. Trick-Or-Treat! 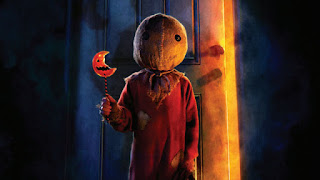