If you've heard of Stan Winston's Pumpkinhead, you may think "oh, I forgot about that movie!" or you might wonder, "Did this movie kill the slasher genre?" While the second notion may be an exaggeration, the over-saturation of absolutely terrible retreads of slashers produced in the late 1980s created a hole that is still gaping today. Tack on an underwhelming box office performance for an original film in a genre that was already on its way out the door...and well the rest is history until the original master Wes Craven debuted 1996's Scream. So with this all in mind and ignoring the convoluted franchise media that followed it, I'll tell you why I still loved it. Don't like to read? Pumpkinhead is a solid 7 out of 10. 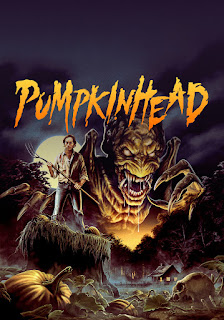 The first forty-five minutes to an hour or so of this movie is actually delightfully entertaining and even well-written by standards outside the horror genre. As a viewer in the year 2018, the story and presentation holds well to conventions. This film stands out to me from other slashers of the era in that the film is effective in grooming the viewer to becoming invested in outcome and characters. The first standout of the picture is the fantastic performance of lead actor Lance Henriksen. This movie is my only exposure to his work in cinema, but his chops nearly single-handedly carry this movie from a forgettable B-movie to a staple of its subgenre. Given the character is well-written, but Henriksen brings the script to the next level through his chemistry with his on-screen son. We all wish we had a father who would summon a demon to avenge us, right?!? Standout scenes include his interaction with the witch as well, perfectly serious and convincing as an 80s witch hut scene could be. Despite, its obvious flaws, the film was cast perfectly well. The movie's greatest strength is its ability to stay engaging, and the pace is satisfying. The cabin sub-plot was intriguing for sure, and builds sympathy for the other friends who got roped into this awful trip. Its biggest weakness is its damning characteristic: the kill scenes are boring, or straight up frustrating. When you include the opening to the bit, three of the titular monster's kills are by...dropping people from high places? The window scene was definitely cool, and Pumpkinhead's absolute disdain for Joel is interesting, but the third act of the film is poor execution of a neat concept. Wrapping up Ed Harley and Pumpkinhead's characters was well done, but the rest is a real mixed bag of film that closely resembles an uninspired SyFy original.

The creature design is menacing and realistic from a cosmetics perspective, but the look of Pumpkinhead feels off. He is lumber and awkward in stature and moves in a way that reminds one of an animatronic dinosaur. Stan Winston has a sufficient background in this department and the life-like aspects of it are well put together, however the model has aged poorly and Pumpkinhead looks more like a zombie ninja turtle than a manifestation of revenge now. In terms of technical aspects, the shot of Pumpkinhead breaking down the remains of the church building is iconic and one of the best moments of the piece. The music was as good as anything Nightmare on Elm Street or Friday the 13th antagonists prowled about to and the feel of the mountainous Appalachian setting is captured well for something shot in northern California. This is one of the more strongly opinionated movies of that decade in horror, were you thrilled or chilled? 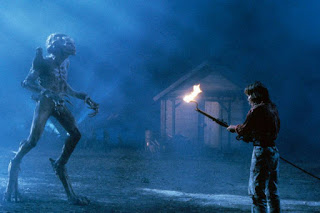