Ah, Forbidden Planet, the mother of modern Science Fiction media. Nothing can be said about it that hasn't already been said, which is precisely all the reason I need to try! An absolute benchmark for effects and Gene Roddenberry's primary inspirations for Star Trek, it's impossible to understate just how important this movie was, but...it is any good? Don't want to read any further and are still wondering whether to watch a movie that transformed cinematic history forever? I'm giving it a 6.5 out of 10. 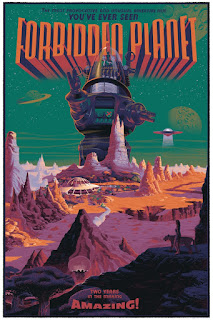 Let's get the stars of the show out of the way early, shall we? Let's talk about Robby the Robot. Robby is an icon that personifies science-fiction itself. He's fascinating, hilarious, and out of this world. In addition, you can tell this dude is just fucking constantly. For an android he's very capable, strong, and charismatic. I absolutely love Robby the Robot. I thought initially that perhaps I could name this blog in his honor, but I imagine the copyright infringement folks may just find their way to my obscure review page and kick down my door. At least half of his quips in the film are memorable, from the very time you meet him on his escort mission. Commander Adams remarks how well he likes the high oxygen content of his new surroundings, when Robby remarks that he "seldom uses it himself". His interactions with the cook are particularly comedic. I imagine without the inclusion of this beautiful mechanical beast, the movie might become a boring slogfest, and it almost still was. Outside of his actual character, Robby's design is convincing and realistic, easily topping the best of his contemporaries. The only robotic entity that comes close from the era was also conceived from the same mind that designed the B9 robot of Lost in Space fame, Robert Kinoshita. I'd mention that Kinoshita also dreampt up the impressive Tobor robot, but Tobor also looked like he was wearing roller-skates. Robby has subsequently appeared in over 20 other projects in the following half-century, although many were a poor attempt to cash in on his popularity or make the most of the expensive props used by MGM in the making of Forbidden Planet. If you've ever seen the masterpeice that is Looney Tunes: Back in Action, you've been struck by Robby. Last fun fact: In 2017,  the original Robby was sold at auction for a whopping $5,375,000 and awarding him the honor of the most expensive film prop ever sold. 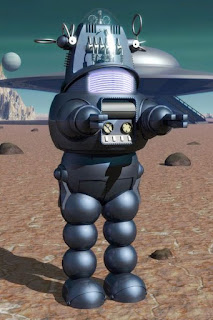 Seeing Leslie Nielsen both young and serious is a bit jarring at first, but he plays the role of a leading man with confidence. His hair is fabulous, but apart from that there is not much that stands him apart  from other male action heroes of the time. Either way, the movie was not really impacted by his presence in a way that a similar actor could not achieve. Walter Pidgeon also represented a certain level of fitting the part well without spectacular prowess. At times his performance seemed robotic or forced, as if he were attempting to recall what the next part of the film held as it was unfolding in front of him. He did seem very intellectual in manner and appearance, which aided his role greatly. I must however give immense dusey points to the casting of Anne Francis. She is marvelous, beautiful and arguably among the best "damsels in distress" witnessed by the many decades of big-screen science fiction. In retrospect, her performance may seem as though her look and quirks lent well to her character's naivety, and if that is true, her role is still commendable. I enjoyed her immensely, and given that she was the only woman featured in the movie, I'm glad it was her.

On to the bulk of it, the special effects of the film are impressive and grandiose even in the 21st-century. Believe it or not, Disney coordinated these illusions that instantly launched the film straight to the gold standard of the genre. The monster from the Id is menacing and familiar, its invisible prowling is mighty, and its attacks fearsome. The blaster shots fired were not exactly as awesome, but serviceable. The metallic makings of the doors and walls of the laboratory are still filling my mind. I've not quite sure technologically how it was constructed. This whole division of the doctor's abode is phenomenally mapped with space-age decadence. The avant-garde soundtrack is a key player in building tension and curiosity as we move further into the cosmic wasteland and the secrets of the Krell begin to unfold. I've heard in certain circles, the composers and musical performers could not be properly credited at the time, given how the electronic blips and beeps were interpreted. It's no secret that Forbidden Planet premiered many state of the art effects and features, appreciated now as it was then, and used to great effectiveness.

The biggest flaws of the film is undoubtedly character work, pace, and dialogue. I won't lie, the movie is a fantastic journey into the unknown, but chunks of screen time are straight up boring or forgettable. You may accredit some of these issues to furthering plot or necessary set-ups to understanding the setting, but I disagree. The introduction to the crew and their mission is entirely too long and intricate. Much of the exposition to the Krell race of people is also forgettable.  The pace seems wonky at parts as well, with the last 40 minutes of the film seemingly distraught over its own focuses and motivation. The science behind the technology is sometimes unsure too. I won't pick on the movie for being so off on their moon landing predictions, but some of the grander objects of the movie are clearly for show as opposed to functionality and may take viewers out of their willing suspension of disbelief. If you are looking for a sense of realism somewhere in the premise, you are sitting in the wrong theater. The dialogue seems to suffer from the aforementioned plague of sensible reason. Almost every character in the film is one-dimensional and bland, excluding Altaira, Robby, and oddly enough, the cook. Characters speak to one another in odd conjectures that seem far from human and highly scripted at that. A lot of acting seems to hover in the space of going through the motions. This can be overlooked as a stylistic choice given the characters forlong states of isolation if you squint hard enough, however. Interactions between the crewmen and Altaira are a bit uncomfortable at times to see, especially the healthy practices taught to Ms. Morbius. The men are altogether too aggressive for my liking, but I suppose it was a sign of the times, even if their behavior is gross to me in 2018. The movie could have used more personality to match its beautiful worldbuilding. Another criticism I hold in regards to the writing is the ham-fisted intellectual aspects of its finer plot points. The film seems to exude some sort of cockiness in its contents because it is "smart" and thought provoking, which is a bold claim for a production that stole almost its entire premise from a Shakespearean play called The Tempest. Here is the definitive moment of the film, in quote:

"Alta, about a million years from now the human race will have crawled up to where the Krell stood in their great moment of triumph and tragedy. And your father's name will shine again like a beacon in the galaxy. It's true, it will remind us that we are, after all, not God."

Indeed a very interesting narrative that will leave the audience pondering the future of mankind and questioning the methods of the Krell. Comment your thoughts on this quote for me please, if you will.

After that detour, a fun look at the writing of this release is that the film always keeps you guessing and predicting what will happen next. Did Dr. Morbius kill the other members of their colony? Is Altaira human at all? What are the origins of this monster, if it exists? You're constantly expected some wild betrayal, and though the film settles on one singular twist it is slated to feature many questions for the viewer to check during its run time.

Overall, I have thought a great deal about my impression of this film and its place in history. I wasn't extremely entertained, but I was more than satisfied by the effects, atmosphere, and of course the color! It was worth it for papa Robby. I can officially say that I have reviewed the birth of modern sci-fi. One small step for Louis, one big step for Club Dusey.